Beth Riesgraf is still unmarried. Previously, she was in a relationship with actor Jason Lee from 2001 to 2007. The duo was engaged to get married but later they got separated.

After break up, he went out with Ceren Alkac and got married in 2008. In the meantime, she started having an affair with an Irish actor Alan Smyth. The duo began dating in 2009 and started living together in her house in Los Feliz. Alan revealed that the duo met for the very first time on the sets of ‘Leverage’. The couple got separated in around 2016/2017. The reason was supposed to be the flaunting pictures of Beth with another guy on her social media.

The mysterious person was identified as Jon Fletcher and after that, they began sharing numerous photos on social media and Beth confirmed the relationship by writing “I Love you in #NY” as a caption of the couple’s photo in December 2017. 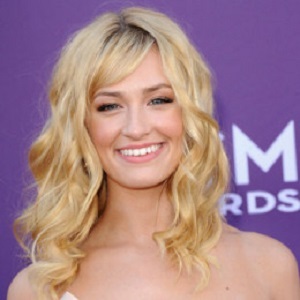 “I love dressing up around the holidays! My friends also really like to get dressed up. It's an excuse to get fancy.”

Who is Beth Riesgraf?

Beth Riesgraf is an American actress who is best known for her role as parker on the TNT television series ‘Leverage’ from 2008 to 2012.

She was born on August 24, 1978, in Belle Plaine, Minnesota, USA. Her birth name is Beth Jean Riesgraf and she is currently 43 years old. Her father’s name is Elroy Othmar Riesgraf and her mother’s name is Janet Ann Riesgraf. She is the youngest of 6 girls.

Beth played tennis, and softball and rode horses as a kid. She shifted to Les Vegas, Nevada at the age of 13. Beth holds American citizenship and her ethnicity is a mix of German, Danish, and the British Isles.

She attended Cimarron-Memorial High School and graduated from there in 1996. She was the Prom Queen in her senior year and she was voted ‘Most Admired Senior’ in her high school. Beth had a high passion for photography and she was a member of the photography club in high school.

She began modeling in her early twenties and traveled the world with the hope to grow her knowledge of photography. Then, she played in commercial gigs and auditioned for film roles.

She debuted her film career with the film ‘The Summer of My Deflowering’ in 2000 in which she portrayed the role of Megan. After two years, she played the character Krissy in ‘Scorcher’. His other notable film roles include Mother in Store in ‘Alvin and the Chipmunks’ in 2007, Edie in ‘Nobody’ in 2009, Anna Rook in ‘Intruders’ in 2015, etc.

She started working in television in the role of Waitress in the episode ‘Trainstopping’ of ‘Spin City’ in 2001. In the same year, she portrayed the main role of Loretta in ‘Undressed’. She along with her ex-boyfriend, Lee appeared in the series ‘My Name Is Earl’ from 2005 to 2007.

She portrayed the recurring role of Dr. Maeve Donovan in the series Criminal Minds’ from 2012 to 2013 and again in 2017. She also appeared in the web series titled ‘Caper’ as Alexa in 2014.

She was nominated for Saturn Award in the category Best Supporting Actress on Television for ‘Leverage’ in 2011, 2012, and 2013.

She has an estimated net worth of around $3 million as of 2022, and she has earned that sum of money from her different careers.

There were rumors regarding her marriage to actor Jason Lee but rumors ended after their separation.