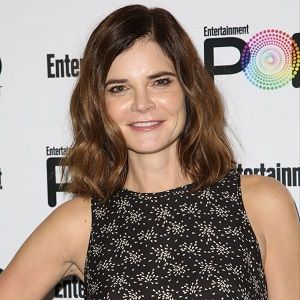 The 44-year-old American actress, Betsy is a married woman. She tied the knot with her boyfriend Grady Olson in 1996 after dating him for one year. Together, they also welcomed two children Freddie and Josephine.

Since their marriage, the couple has maintained a perfect relationship with them and never involved in any extra-marital affairs and disputes. Besides him, Betsy has never seen with any other man to date. Currently, Betsy and Grady are enjoying their married life and living elegantly.

Who is Betsy Brandt?

Betsy Brandt is an American actress. She rose to prominence after appearing in the TV series, Breaking Bad in 2008. Furthermore, she has also won Screen Actors Guild Award in the category of Outstanding Performance by an Ensemble in a Drama Series for Breaking Bad. Her other notable films include No Ordinary Family and Magic Mike.

Additionally, she has also starred in a couple of hit TV series such as The Michael J. Fox Show, Masters of Sex, CSI: Crime Scene Investigation, and a few more.

Betsy was born on November 14, 1973, in Bay City, Michigan, United States. She is the daughter of Janet and Gary Brandt. Talking about her nationality, she is American and her ethnicity is mixed. As a child, she developed her interest in directing stage musicals.

Concerning her education, she attended Bay City Western High School in Auburn, Michigan in 1991. .Later, she completed her graduation from Harvard University’s Institute for Advanced Theater Training and the Royal Scottish Academy of Music and Drama, Glasgow in the theater.

Betsy began her acting career at the Arizona Theatre Company. Later in 1998, she appeared in the film Confidence in the role of Natasha. Soon after that, she also starred in a couple of movies such as Memphis Bound and Gagged, The Red Boot Diaries, All Features Great and Small, and few more. Recently, the veteran American actress has also featured in FANatic and Flint. Initially, Betsy made her TV debut on Judging Amy as Elizabeth Granson.

Moreover, she got huge recognition as she played the role of Dawn Hanson in CSI: Crime Scene Investigation in 2006. Back in 2008, Betsy stole the limelight after appearing in the hit series Breaking Bad. In 2010, she also landed two series which include The Whole Truth and Miami Medical. She has been playing as Heather Hughes in Life in Pieces since 2015. Additionally, her role as Annie Henry in 2013 The Michael J. Fox Show got huge appreciation.

Being a legendary actress, she earns a handsome amount of money from her profession. However, her salary and net worth are unknown.

As of now, Betsy has won Screen Actors Guild Award in the category of Outstanding Performance by an Ensemble in a Drama Series for Breaking Bad.

Betsy has a height of 5 ft 9 inches and weighs 57 kg. Furthermore, she has a pair of gorgeous hazel eyes and brown hair. Besides this, there is not any information regarding her other body measurements.