Betsy Mikesell is a Youtuber, entrepreneur, and web personality who has a Youtube channel titled 'The Mikesell'.

Betsy Mikesell is a married woman and a mother of three children. She married her teenage sweetheart Gentry Mikesell who is professionally worked as a managing partner for Moxie Logistics.

Besides, he also appeared on his wife’s youtube channel. The pair started dating each other at the age of 13. However, their marriage details are unknown.

The couple has three children, a girl named Alyssa Mikesell who was born on November 8, 2001. The second time, she gave birth to a twins son named Brock Mikesell and Boston Mikesell on May 20, 2004.

Her all three children are also social media personalities. All three of them have their own self-titled Youtube channel. However, the twin’s brother owns a youtube channel together. 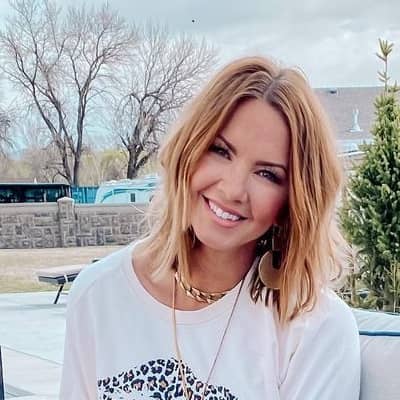 Who is Betsy Mikesell?

Betsy Mikesell is renowned as an American Youtuber, entrepreneur, and social media personality.

She is best known for her self-titled Youtube channel title ‘The Mikesell’ as the matriarch of the account.

The Youtuber is also known as the mother of Youtuber Alyssa Mikesell, Brock Mikesell, and Boston Mikesell.

Betsy was born on the 26th of December in 1980 in America. She holds American citizenship and is of Caucasian ethnicity.

The name of her parents has not yet been disclosed. However, she has a sister named Jennifer Maclnnes Hull.

Moving towards her academic history, she studied at Paul Mitchell school from 1999 to 2000.

Moreover, she might have joined University but hasn’t yet disclosed the name of her University.

Betsy uploads a video for the first time on January 30, 2019, on her Youtube channel title, ‘The Mikesell Family’. Her first video title ‘Caught on security camera’ gained over 153k views with more than 3k likes to date.

As of now, she has more than 184k subscribers on her Youtube channel and already got Silver Play Button by Youtube. Her most viewed videos are Final Seconds of our Plane Crash / *Caught on Camera* (over 2 million views), House Tour / The Mikesell Family (over 800k views), and We Survived a Plane Crash! (over 1 million views).

Now, she is the CEO of the zipper bedding company known as Beddy where she sells online bed design accessories like Bed Wedge, Cushions, Pillows, Bed Sheets, and so on.

Until now, she has not been part of any disputes and scandals that hamper her uprising career and personal life. Also, she stays miles away from such sorts of trouble and controversial acts.

But, The Mikesell family had a plane accident in the Duchesne Country near Moon Lake on the 7th of August in 2020. Nevertheless, everyone present on the plane survived the tragic accident with several injuries.

The reason behind the accident is due to the less power in the engine. Similarly, her four ribs were broken on each side, and also had neck injuries as well as bruised lungs during the accident.

Likewise, her husband was suffering back injuries, and his femur, tibia, and shattered ankle were broken. Similarly, her son Boston’s hip fractured.

As per other online sources, she has an estimated net worth of around $100 thousand throughout her career as an entrepreneur as of 2022. In addition, she has also earned through various endorsements and her Youtube channel.

However, her exact salary, yearly income, and real estate are still under review. She earns in the range of $242 to $3.9k per month through her Youtube channel. The estimated amount will be $2.9k to $46.4k annually.

Mikesell stands at the height of 5 feet 5 inches tall whereas her weight is around 56 kg. Likely, she has slightly curly hair with light brown color and her eye color is green.

However, her other body statistic including her waist, hip, and breast sizes is still under review.

Similarly, she is also active on Tiktok with more than 98.7k followers and 1.8m likes.