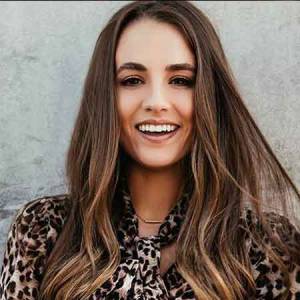 Betsy Woodruff is engaged to Jonathan Swan. They dated for a long time and got engaged. Jonathan is also an Australian journalist. In November 2014, Woodruff tweeted and confirmed her affair. Finally, they got engaged in March 2018. She posted a picture on Facebook and revealed her engagement.

The couple is soon going to get married. There is no information about her past affairs.

Who is Betsy Woodruff?

Betsy Woodruff is one of the well-known names in the political field. She now works as a political reporter and is also a major contributor to The Daily Beast. Moreover, the reporter has also appeared on different talk shows talking and discussing different political issues.

Betsy Woodruff was born on 31st October 1989 in Purcellville, Virginia, the U.S. His current age is 29 years. Her father’s name is Scott Woodruff and mother’s name is Jane Tharp Woodruff.

Her mother used to work as a bookstore assistant at Patrick Henry College Bookstore. She grew up with her siblings. Her brother’s name is Chris Woodruff who is an executive director at Life Raft International and resides now in Bangkok, Thailand, with his own family. Likewise, her sister’s name is Jane Woodruff, who works at Dunlap Bennett & Ludwig and resides in Leesburg, Virginia. Her ethnicity remains unknown. However, her nationality is American.

Woodruff shares a good bond with her family and also keeps posting a lot of pictures with her parents on her social media profile.

Her intern was so good and she completed her graduation from Hillsdale in June 2012. Just after it she received the William F. Buckley Fellowship from the National Review Institute and started to work.

As after her graduation, she received the William F. Buckley Fellowship from the National Review Institute and was working there. She was having good earning but worked there for two years. Then she started to work as a writer in the Washington Examiner. There she used to write about politics but after working there for some time she left it out.

Then since March 2015, she is working as a political reporter in The Daily Beast. She has built a good career working there and also covered several topics that range from campaigns to Capitol Hills also.

She also covered the 2016 presidential campaign which also included Robert Mueller’s investigation into Russian involvement in the election, and all the matters surrounding Congress.

The reporter is honored with several awards for her journalism career, including one from the Michigan Press Association. In 2014, she was awarded the Wallace Brown Award for her achievement in the field of journalism at a very young age. And she always receives appreciation for her work.

Betsy Woodruff: Salary and Net Worth

Betsy has built a good career and must have good earning. Her exact salary is unknown. But according to The Daily Beast reporter, her salary is between $69k-$74k.

And talking about her net worth it is estimated to be around $1 million. She has a lavish lifestyle living with her fiancee and family. She resides in an expensive house in Washington D.C.

She is doing his best work without harming others. She doesn’t normally share her personal information towards social media and maintain a private life. So she is not seen in any of the rumors and controversies.

The 28 years reporter, has an alluring body with a height of 5 feet 5 inches and a bodyweight of 57 kg. She has maintained her body fit maintaining the perfect curved shape. Her body measurement is 34-26-34 inches. And she has a brown hair color and light brown colored eyes. However, her shoe and dress size is unknown.

She is active on social media sites. The reporter has her own official account on Twitter and has more than 210.3K followers. Likewise, she is also active on Instagram with more than 2.2k followers. She doesn’t seem to use Facebook.

Coronation Street star Alison King is engaged to her mystery boyfriend! Know about her previous relationships!