Bette Midler is a married woman. She married Martin Von Haselberg, who is also an actor. The couple tied the knot on December 16, 1984.

The couple has a daughter together namely, Sophie Von Haselberg. 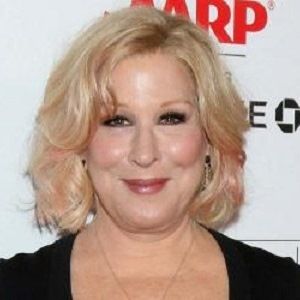 I want world peace. Please. Just for my sake, before I go. I also hope that Meryl Streep has the good taste to step aside and let the rest of us have a crack... but I know she won't. She has a really good agent. She's great, but I know there are some ladies behind her saying, "Meryl, for God's sake, do you have to say yes to everything?"

I'm glad my daughter has been [university educated]. I sometimes think I should go back to school to learn French and music, but who would have me?

Who is Bette Midler?

Bette Midler is an American singer, songwriter, actress, comedian, and film producer. Bette Midler has also been honored with multiple Grammy Awards and Oscar nominations for her work in films like ‘The Rose’ and ‘Beaches.‘

She also came to prominence in 1970 when she also began singing in the Continental Baths, a local gay bathhouse where she managed to build up a core following.

Bette Midler was born in Honolulu, Territory of Hawaii on December 1, 1945. She was raised in rural Aiea, Oahu.

She is the daughter of Fred Midler (father) and Ruth (mother). Her father worked at a Navy base in Hawaii as a painter and was also a house painter and her mother was s a seamstress and housewife. She grew up in the neighborhood of Aiea, in Honolulu, Hawaii.

She loved singing when she was young and her mother was very supportive of her so sent her to the theatre. Bette was a part of many amateur shows during her teenage days.

She has three siblings namely, Daniel Midler, Judith Midler, Susan Midler. Whereas, she belongs to American nationality and Ashkenazi Jewish ethnicity. Her birth sign is Sagittarius.

On talking about her profession, during 1965, Bette Midler shifted to New York City and made her debut on stage with American playwright and theatre director Tom Eyen’s Off-Off-Broadway plays— ‘Miss Nefertiti Regrets’ and ‘Cinderella Revisited’. Likewise, she also played the unaccredited role of a background actor, ‘Miss David Buff’ in the 1966 American film, ‘Hawaii’, a role which helped her earn money to relocate from Hawaii to New York.

Whereas, from 1966 to 1969, she also became acquainted with the Broadway-style of acting and appeared on the Broadway show ‘Fiddler on the Roof’ and the Off-Broadway rock musical, ‘Salvation’. During 1970, she also gained attention while singing at ‘The Continental Baths’, a gay bathhouse located in New York City.

Likewise, in 1976, she came out with her third album titled ‘Songs for the New Depression’, which peaked at the 27th position on the ‘Billboard 200’.  In the following year, she appeared on the ‘The Tonight Show Starring Johnny Carson’. During 1993, she also appeared in the film ‘Hocus Pocus’.

Additionally, in 1997, she was also seen on the TV special ‘Diva Las Vegas’ and played a part in the sitcom ‘The Nanny’. That year, she also acted in the romantic comedy film ‘That Old Feeling’. During 1998, she came out with her ninth studio album titled ‘Bathhouse Betty’, which was a reasonably successful album.

There is no information regarding her income, or salary. Whereas, her net worth was around $250 million as of 2022.

On talking about her body measurements, Bette Midler has a height of 5 feet 1 inch. Additionally, she weighs is 44Kg. In addition, she has a measurement of 36-25-36 inches.

Betty’s hair color is blonde and her eye color is brown.

On talking about her social media, Bette has over 1.54M followers on Twitter. Likewise, she has around 985K followers on Instagram. But she is not active on Facebook.