Betty White was married thrice. In 1945, she married Dick Barker, a U.S. armed forces pilot but the marriage was short-lived.

Then, she married Lane Allen, a Hollywood agent but this marriage too ended in divorce in 1949.

In 1963, she got married to TV host and personality Allen Ludden and the two remained together till his death in 1981. 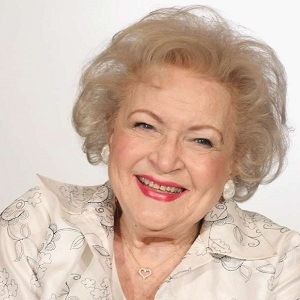 I'm in the acting business. That's the ego business. When you get offers, the way things are going now you've gotta enjoy it. You've gotta take to time to taste it, and appreciate it and make the most of it. Those offers aren't going to come around all the time. By the time I'm 100

It's your outlook on life that counts. If you take yourself lightly and don't take yourself too seriously, pretty soon you can find the humor in our everyday lives. And sometimes it can be a lifesaver.

I think a lot of people like hidden-camera shows where they think they're spying on somebody who doesn't know they're looking at them. And nobody takes it seriously - you either enjoy it and get a laugh out of the reactions or not.

Who is Betty White?

Betty White was an American actress and comedian. Similarly, she was also a producer, a television personality, and an animal rights activist.

Similarly, she was one of the pioneer American women who played a role both behind and in front of a camera during the early days of television shows in the country.

Betty was born in Oak Park, Illinois, the United States on January 17, 1922, aged (99). She is the only child of  Horace Lawrence White(father) and Tess Curtis White(mother).

Betty’s family moved to Alhambra, California, and later to Los Angeles, during the Great Depression. She belongs to American nationality and mixed (English- Danish- Greek) ethnicity. Her birth sign is Capricorn.

On talking about her profession, she joined the radio for reading commercials and playing small parts in plays after being rejected by movie companies. Then, three months after graduation in 1939, she also made her debut appearance on television by singing songs from the opera called ‘The Merry Widow’.

During 1949, she also co-hosted the daily live show ‘Hollywood on Television’ with Al Jarvis and continued for four years. During 1954, she also produced and briefly hosted the daily talk show ‘The Betty White Show’ on NBC.

Similarly, in the 1970s, she produced a sitcom of the same name. Whereas,  from 1955 up to 1975 she was a commentator on the ‘Tournament of Roses Parade’ show with co-host Lorne Greene.

Similarly, from 1957 to 1958, she also played the role of Vicki Angel in the sitcom ‘Date with the Angels’. Then, she also appeared on the big screen for the first time in 1962 in the lead role in the feature film drama ‘Advise & Consent’.

She won Primetime Emmy Award for Outstanding Guest Actress in a Comedy Series for The John Larroquette Show (1993). Additionally, she won American Comedy Award for Funniest Female Performer in a TV Series (Leading Role) Network, Cable, or Syndication for The Golden Girls (1985). In addition, she won a Lifetime Achievement Award. She won the Golden Apple Award for Female Star of the Year.

There is no information regarding her income, salary. Whereas, her net worth was around $ 75million as of 2022.

On talking about her body measurements, Betty has a height of 5 feet 4 inches. Additionally, she weighs is 58Kg. In addition, she has a measurement of 32-25-35 inches. Betty’s hair color is grey and her eye color is blue.

Also, read the affair, salary, the net worth, controversy, and the bio of  Drena De Niro, Molly Shannon, Anne Meara