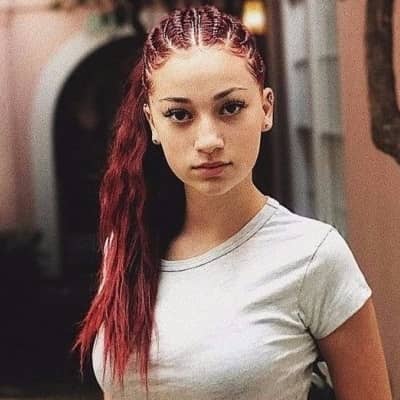 There's a softer and harder person in everyone, depending on the time. I never put my hands on my mom, and my mom never put her hands on me. Teen boys are a huge mess.

She also has a tattoo on the back of her leg that says “Vas” which is a rapper Yung Bans’ first name.

There are rumors that Bhabie is dating him. They often post pictures together on social media. They might be dating but haven’t admitted it yet publicly.

Who is Bhad Bhabie?

This star was born on March 26, 2003, in Boynton, Beach, Florida. Her real name is Danielle Bregoli Peskowitz. She is the daughter of Ira Peskowitz and Barbara Ann Bregoli. They separated when she was an infant. Therefore, she was raised by her mother.

Bhabie belongs to the mixed ethnicity of Ashkenazi Jewish-Italian-Irish-Norwegian. Her education information is not available. There is no information about her siblings.

Bhabie started her career in 2016 and is still active in her career line.

She earned around $900k as a brand ambassador of copycat Beauty which was 6 months contract.

In her Tiktok account, she has more than 2 million followers with 16 million views. She is followed by 2 million fans on her Facebook.

Bhabie has brown eyes and her hair is dark black color but she has dyed her hair red. She stands at a height of 5 feet 3 inches and weighs around 56kg.

Similarly, her body measurement is 34-26-32 inches and her shoe size is 5. She has 16 different tattoos on her body.

She posted a picture with a boxy hairstyle which caused a scandal. Her hairstyle became a controversy in her family because dying hair meant adopting western culture.

Moreover, she was sentenced to probation(5 years) for marijuana possession and auto theft.