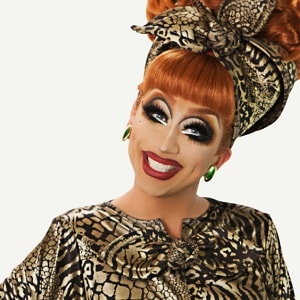 Bianca Del Rio might be living his single life. There is no rumor heard about her relationship and affair.

Even if he is in a relationship with someone, there is no information available about his affair.

Who is Bianca Del Rio?

Bianca Del Rio is an American drag queen, comedian, actor, and costume designer. He is best known for winning the sixth season of ‘RuPaul’s Drag Race’.

He was born on June 27, 1975, in New Orleans, Louisiana, USA. His birth name is Roy R. Haylock and he is currently 45 years old. He grew up in Gretna, Louisiana.

He has a mixed descent of Cuban and Honduran. Details about his father and mother are not available.

He attended West Jefferson High School and started acting and designing costumes for plays. He later moved to New York City and worked at Bloomingdale’s for nine months before returning to Louisiana.

Bianca Del Rio started working as a costume designer in 1993 and started performing as a drag artist in 1996 in the play ‘Peagent’ in New Orleans. He was observed by the drag queen Lisa Beaumann and cast him in shows at the nightclub Oz.

He was selected as co-grand marshal for Southern Decadence XXIX with Pat ‘Estelle’ Ritter and Rick Thomas. Rio made his way towards New York City and worked as a customer for Broadway shows, ballet, and opera. He made his performance in drag as Bianca Del Rio.

He featured in the web series ‘Queens of Drag: NYC’ in 2010 by gay.com and appeared on Óne Night Stand Up: Dragnastic! NYC’ by Logo TV, appeared on the cover of ‘Next’ and on the variety show ‘She’s Living for This’ in 2010.

In December 2013, NYC by Logo TV announced that Bianca was among 14 drag queen to compete on the sixth season of RuPaul’s Drag Race and she ended up reaching the top three. She was crowned the winner of the sixth season on May 19, 2014. She became the first contestant in the competition without ever placing low or at the bottom of a challenge. Also, she is the first Hispanic winner of RuPaul’s Drag Race.

She portrayed the leading role in the independent film ‘Hurricane Bianca’ in 2013. After her success from Drag Race, she has written and toured several standup shows, like ‘The Rolodex of Hate’ in 2014, ‘Not Today Satan’ from 2015 to 2016, and ‘Blame It On Bianca Del Rio’ since 2017.

He has not revealed any data about her income and salary so, it is hard to predict his net worth.

There was rumor heard that he will take part in the new season of Celebrity Big Brother but it has not been confirmed as her January show has not been canceled.

Bianca Del Rio has a height of 5 ft. 9 inches and he weighs 56 kg. He has got dark red hair and blue eyes.

To know more about Harvey Keitel, Jake DeVito, and Ben Koldyke, please click on the link.