Biannca Raines is a Youtuber who started her channel with her partner, now husband, Damien Prince. She became pregnant when she was minor. Biannca and Damien have two children. 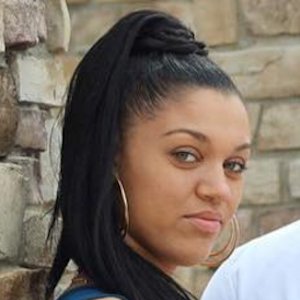 know your worth then add tax

still learning to love the parts of me that no one claps for ?

the only way you’ll win is if I quit

Biannca Raines is married to a YouTube star Damien Prince. They gained popularity as well as fame together from their youtube channel. They engaged on November 20, 2016, followed by their marriage on 18th March of 2017.

Apparently, their relationship is going strong without any signs of problems and complications hovering over their relationship. They are often seen as an inspirational couple to lots of people around the world.

Biannca Raines is a famous YouTube star who hails from America. She gained a lot of popularity and fame for appearing alongside her husband Damien Prince in their channel named D&B Nation.

Biannca was born on March 6, 1997. Being born in the United States of America to Jennifer, mother and Charles, father. Her parents are divorced and her mother remarried Ryann.

She has five siblings, her two sister’s names are Alexis and Christian.

Her nationality is American and her ethnicity is Caucasian. Similarly, there is not much insight into her early life and childhood.

Reflecting on her education and qualifications, she completed her graduation from R. Nelson Snider High School.

Biannca Raines started her career appearing alongside her husband Damien Prince in their channel named D&B Nation. They post videos of pranks as well as reaction videos on their channel.

Moreover, she is extremely popular on other social media platforms such as Facebook, Instagram, and Twitter. Her YouTube channel has more than 4.8 million subscribers. Also, she is associated directly with other youtube channels named ‘The Prince Family’, ‘Biannca Prince’, ‘Toys &DJ’, and ‘Damien Prince’.

As a result of a successful career as a Youtuber, it has presented her fame as well as fortune.

As of now, her net worth is estimated to be from $18 Million

Biannca became pregnant with her now-husband when she was a minor. After they had a child, they started having differences.

She accused her partner of using her just for his sexual desire, so with anger she left his home. However, later the couple sorted out their issues and are married together.

Biannca Raines has a well-maintained and slim body figure. She stands at a height of 5 feet and 4 inches and weighing between 55 to 60 kg.

Moreover, her body measurement is 34C-25-36 inches, which gives her an hourglass body figure. She has black hair and light brown eyes.

Biannca is quite active and massively popular on various popular social media platforms. She has more than 2.5 Million followers on Instagram and 361k followers on her Twitter account. Similarly, she has over 469k likes on her Facebook page.