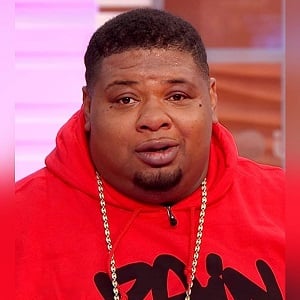 I'm from South. Acre Lane, Brixton, London. What's it like? Well just say the police have to earn their wages there!

Big Narstie (Tyrone Lindo) has not been involved in any serious relationships to date. There are no records available about his past and present relationships. At present, he is believed to be single.

Who is Big Narstie?

Big Narstie (Tyrone Lindo) is a British rapper and MC. People mostly know him as a member of grime crew N-Double-A and as an internet personality. He released his album titled ‘BDL Bipolar’ in 2018.

Narstie was born as Tyrone Lindo in Lambeth, London on 16 November 1985. He became interested in the world of music and rap from an early age. Lindo is of British nationality. Furthermore, there are no details available about his ethnic background at present.

Talking about his education, no information is available about Narstie’s educational background.

Narstie signed to independent label, Dice Recordings in 2006. Previously, he had released his first mixtape ‘I’m Betta Than U Vol. 1’ in 2005. Since then, he has released several other mixtapes including ‘What’s the Story Brixton Glory’, ‘Hey It’s That Fat Guy’, ‘Drugs and Chicken’, ‘Fat And Proud’, ‘The Big Man Returns’, and ‘Pain Is Love’ among others. Additionally, he has released five Eps till date: ‘Pain Therapy’, ‘Pain’, ‘Don’t Fuck Up The Base’, ‘Hello High [w/ True Tiger]’, and ‘Base Society.’

Tyrone released his first and only album ‘BDL Bipolar’ in 2018. In addition, he has performed at a number of festivals across Europe like The Wireless Festival, the Hip Hop Kemp Festival in the Czech Republic, The Outlook Festival in Croatia, and A Day In Dam with English Frank and Black The Ripper. Apart from his career in music, Tyrone has also appeared in several movies and television series including ‘Gangsters Gamblers Geezers’, ‘Sounds Random’, ‘Rise of the Footsoldier Part II’, ‘Anuvahood’, ‘Dubplate Drama’, ‘The Jonathan Ross Show’, ‘The Crystal Maze’, and ‘Would I Lie to You?.’

Narstie has won the Urban Music Awards a total of three times in the category of Best Grime Act. Additionally, he has received the MOBO Awards and National Television Award nominations. Furthermore, in 2018, he won the MVISA for Best TV Presenter for ‘The Big Narstie Show.’

Narstie has not revealed his current salary. In addition, there are no details available about his estimated net worth at present.

Narstie became part of a controversy in 2018 after he supposedly pushed Robert White in ‘Britain’s Got Talent.’ Additionally, he became part of another controversy after he was featured in a racist Samsung’s S9 advertisement in April 2018. At present, there are no rumors concerning Narstie and his career.

March 19 episode of the series of The Great Celebrity Bake Off was so hilarious because Big took a quick break during the time of competition to have a snack.

Talking about his body measurement, there are no details available on Narstie’s height and weight. His hair color is black and his eye color is dark brown.