Big Show is a married man. He exchanged vows with Bess Katramados on 11 Feb 2002.

They started to date each other in 2000 while he was still with his first spouse. His current wife by profession is a model who studied at Illinois Lutheran High school.

This couple has two children, a son, and a daughter.

Previously, Paul was in love with Melissa Ann Piavis whom he wedded on Valentine’s day of 1997. But only after three years of living together, they start to live apart. Their divorce was settled on February 6, 2002

Between this time, they welcomed their first child, a daughter named Cierra Wight in 1988. 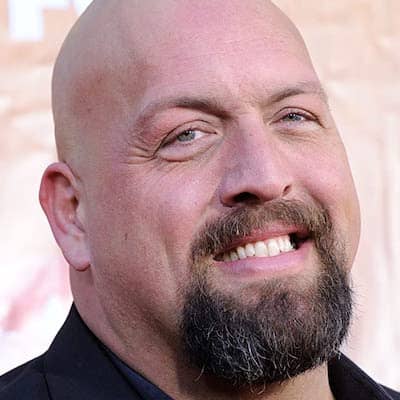 I am the biggest, nastiest bastard to ever set foot in the WWF, and I am damn proud of it.

Who is Big Show, Paul Wight?

Paul Wight famous as Big Show is an American wrestler as well as an actor. Paul Wight’s moves Bearhug, Headbutt, and Colossal Clutch are the trademark of his style.

The wrestler was born on 08 Feb 1972 in Aiken, South Carolina, the United States as Paul Donald Wight II. His father was Paul Wight Sr. (passed away due to cancer) and his mother’s name is unknown.

He belongs to American nationality and is of Caucasian ancestry.

Talking about his education, he studied at Wyman King Academy and then Northern Oklahoma Junior College. Later he enrolled at Wichita State University plus was at Southern Illinois University Edwardsville from 1992 till 1993.

Paul Wight started his fighting career in 1994 and has participated in several championships. Trained by Larry Sharpe plus Thrasher, this Giant has defeated many other wrestlers.

Paul is also an amazing actor. He debuted with a TV series Thunder in Paradise in an uncredited role in 1994. His other TV shows are Hollywood Squares, Fast & Furious Spy Racers, Hannity & Colmes, The Cindy Margolis Show, Star Trek: Enterprise, etc.

Being one of a successful personalities, his net worth is said to be $15 million. Other information regarding his cars and salary is not available.

His Miami property has six bedrooms, two fireplaces, a media room, a pool/spa combo, and more.

This talented actor and wrestler haven’t been surrounded by any huge rumors or scandals. But he was arrested two times.

At first in Dec 1998, the police caught him for allegedly exposing a female motel employee. However, he was let go due to a lack of evidence. The second time he was caught was in March 1999 for another assault.

The case was filed by Robert Sawyer in who said Paul broke his jaw in 1998. He also added that this wrestler abused him verbally and threatened him too.

But just after three days, the decision was made and Paul was found not guilty.

Paul Wight has a built body standing with a towering height of 7 inches.

Likely, his weight is 200 kg. He has blonde-colored hair and green-colored eyes.

The reason for his body growth is called acromegaly which is a condition that makes the pituitary gland produce extra growth hormone.

He underwent surgery in 1990 to make it stop.

Also, he is on sites such as Facebook with around 90k fans.