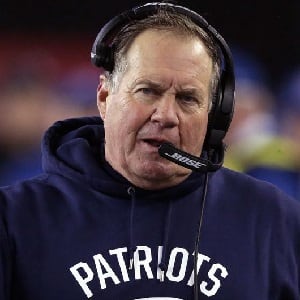 What is the relationship of Bill Belichick?

Bill Belichick was previously married to Debby Clarke. They were together from 1977 to 2006. He has three children from this marriage, Amanda, Stephen, and Brian.

Presently, Bill is in a relationship with Linda Holliday. They have been dating for several years.

Who is Bill Belichick?

Bill Belichick is an American football coach. Currently, he is the coach of the New England Patriots of NFL.

He holds the record of winning five Super Bowls as a head coach. Belichick is considered one of the best coaches in football history.

Belichick was born as William Stephen Belichick in Nashville, Tennessee on April 16, 1952. He was born to parents Jeannette (Munn) and Steve Belichick.

Throughout his childhood years, he grew up in Annapolis, Maryland. His father was an assistant football coach.

Additionally, he developed a keen interest in the world of football since his childhood years. He is of American nationality. Furthermore, he belongs to a mixed ethnic background of Croatian, English, Scottish, and Irish.

In which school did Bill Belichick attend?

Talking about his education, Belichick attended Annapolis High School and graduated in 1970. In addition, he attended Phillips Academy in Andover.

Eventually, he attended Wesleyan University in Middletown. Furthermore, he earned a bachelor’s degree in economics.

Additionally, he began a 12-year stint with the New York Giants in 1979. He also worked as the head coach of the Cleveland Browns from 1991 until 1995. Belichick served with the Patriots for the 1996 season.

He was named the Jets interim head coach in February 1997. Since 2000, he has been serving for the New England Patriots.

Additionally, the Patriots later won Super Bowl XXXVIII and also defended its title the following season, and won Super Bowl XXXIX. All in all, Belichick has a regular-season record of 214–74–0 over 18 seasons.

How much is the net worth and salary of Bill Belichick?

Belichick’s coaching salary is reportedly over $10 million. Additionally, he has an estimated net worth of around $35 million as of 2022.

Belichick became part of several controversies due to the Spygate scandal.

It was revealed that the Patriots had secretly videotaped opposing coaches over several years. Belichick was fined $500,000 by the league. At present, there are no rumors concerning his life and career.

Talking about his body measurement, Belichick has a height of 5 feet 11 inches (1.8 m).

Additionally, his hair color is dark brown/grey and his eye color is blue.

Belichick is not active over the social media. He does not have his official Twitter and Instagram accounts. Additionally, he is not active on Facebook as well.