William Henry Gates III is an American business magnate, investor, author, philanthropist, and humanitarian. He is best known as the principal founder of Microsoft Corporation.

Bill and Melinda Gates decided to divorce after 27 years of marriage as per the reports in May 2021.

The wedding ceremony took place on a Golf course in Lanai, Hawaii.

Melinda is a philanthropist and the co-founder of the Bill & Melinda Gates Foundation. Hence, the court will be dividing their properties and assets but they will be working together in their joint foundation despite the split.

He redoes in Medina, Washington in an estimated $ 125 million house.

Epstein and Bill met for the first time in the year 2011. Due to Jeffrey’s infamous image, Melinda was highly against her ex-husband being in contact with him. In 2013, she warned Bill against his relationship with Epstein. 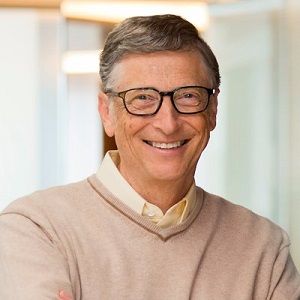 Microsoft was founded with a vision of a computer on every desk, and in every home. We've never wavered from that vision.

If you can't make it good, at least make it look good.

I am a strong proponent of measuring teachers' effectiveness, and my foundation works with many schools to help make sure that such evaluations improve the overall quality of teaching. But publicly ranking teachers by name will not help them get better at their jobs or improve student learning. On the contrary, it will make it a lot harder to implement teacher evaluation systems that work.

Who is Bill Gates?

Bill Gates is the co-founder of Microsoft Corporation. Similarly, Bill is also the Technology advisor of Microsoft. Additionally, for his charity organization, Bill & Melinda Gates Foundation, he acts as the CEO.

Furthermore, he is also the chief executive officer of Cascade Investment and Chairman of Branded Entertainment Network.

He has been a generous philanthropist helping to eradicate several health diseases and eliminate poverty.

Bill Gates was born on October 28, 1955, as William Henry Gates III. He was born in Seattle Washington. His father’s name is William H. Gates Sr. Similarly, the name of his mother is Mary Maxwell Gates.

Mary was the BOD member of First Interstate BancSystem and the United Way. And William Sr. used to work as a lawyer.

Machine and programming fascinated him since his early life. He spent his childhood growing his interest in computers.

For his education, he went to Lakeside School. Later he graduated there in 1973. Then he joined Harvard College after scoring 1590 out of 1600 on SAT.

But after two years, he dropped out of college.

Bill Gates started working on programming in his early college days. He founded Microsoft along with Paul Allen in 1975. In the initial years, he mainly focused on writing codes rather than handling management.

He hooked up with Micro Instrumentation and Telemetry Systems (MITS) to work on the BASIC interpreter. Afterward, in 1980, Microsoft partnered with IBM selling the software for IBM PC. Although he partnered with IBM, he did not give the copyright of the operating system. Then M-Dos from Microsoft became a huge success.

Subsequently, this led to Bill Gates’ success as the man behind Microsoft. After a couple of years on November 20, 1985, Microsoft launched its first retail version of an operating system named, “Microsoft Windows.” He worked as CEO of Microsoft until 2000. After that, he mainly worked as chairman and Chief Software Architect at Microsoft.

Additionally, he also works for other groups and organizations. He is also the CEO of Cascade Investment and Chairman of Branded Entertainment Network.

Furthermore, he sits on the Board of Berkshire Hathaway. He is a philanthropist and has donated billions of dollars to eradicate poverty and diseases like polio and malaria.

He has an estimated net worth of USD 125 billion as of 2022. His earnings from Microsoft’s after-hours trading are approximately $1 billion per day.

He owns a foundation named Gates Foundation which aims to help the issues related to public health, education, and climate.

Also, they are helping by making coronavirus vaccines, diagnostic tests, and medical treatments during this pandemic.

Bill Gates has been part of the criticisms. Previously, educational experts criticized him for donating to and supporting schools with personalized learning philosophies in Africa.

Bill Gates accused IBM of not putting a single button for the “ctrl+alt+del” action.

But people have criticized him for not solving that problem by him. Apart from that, presently he is not part of any controversies and rumors.

Bill Gates has auburn hair and blue eyes. His height is 5 feet 10 inches and weighs around 63.5 kg.

Bill has a huge social media following. He has over 19.5 million followers on Facebook. Similarly, he has 45.1 million and 1.1 million fans on Twitter and Instagram respectively.