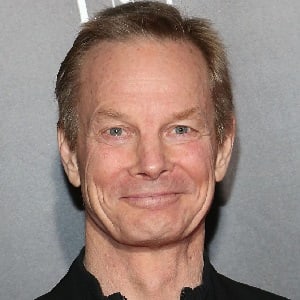 We constantly run lines together before every show too, and then there's a long, traditionally long, story to tell the audience every show. Today, we're doing it twice.

Being nominated is a great thrill, and we like to say that all four of us were nominated, which means that our director, Anthony Page was nominated four times.

It's an exhilarating play, and you come off tired, but thrilled.

People keep telling us, that they didn't know when they were booking tickets for it, but afterwards they say that they've had no sense that they were watching an old fashioned play.

The fact is that we like each other very much, and we of course see each other on stage all the time, but this means more time to spend together, and that's great. We couldn't be happier.

Bill Irwin was previously married to Kimi Okada. They were together from 19 April 1977 to 1982. In 1990, he married Martha Roth. The pair has been together ever since. They have a son together from this marriage, Santos Patrick Morales Irwin. Furthermore, the marriage is going strong as there is no news regarding any extramarital affairs at present.

Who is Bill Irwin?

Bill Irwin is an American actor, comedian, and clown. People mostly know him for his role as Cary Loudermilk in the TV series ‘Legion.’ Additionally, he has also won a Tony Award for his role in ‘Who’s Afraid of Virginia Woolf.’

Irwin was born as William Mills Irwin in Santa Monica, California on April 11, 1950. He was born to parents Elizabeth and Horace G. Irwin. He developed a keen interest in acting since his childhood years. He is of American nationality. Furthermore, he belongs to the mixed ethnic background of Irish, English, and German.

Some other movie and television series that Irwin has appeared in are ‘This Is Us’, ‘Doubt’, ‘Law & Order: Special Victims Unit’, ‘Julie’s Greenroom’, ‘Quarry’, ‘Confirmation’, ‘Sleepy Hollow’, ‘South of Hell’, ‘Ricki and the Flash’, ‘Blue Bloods’, ‘Monday Mornings’, ‘Elementary’, ‘A Gifted Man’, ‘CSI: Crime Scene Investigation’, ‘Lights Out’, ‘The Good Wife’, ‘Life on Mars’, ‘Across the Universe’, ‘The Manchurian Candidate’, and ‘The Laramie Project’ among others.

Irwin has not revealed his current salary. However, he has an estimated net worth of around $ 3 million at present.

Although several of Irwin’s roles in movies and television has been termed controversial over the years, he himself has not been part of any notable controversies to date. Furthermore, at present, there are no rumors concerning Irwin and his career.

Talking about his body measurement, Irwin has a height of 5 feet 11½ inches (1.82 m). Additionally, his hair color is blonde and his eye color is blue.