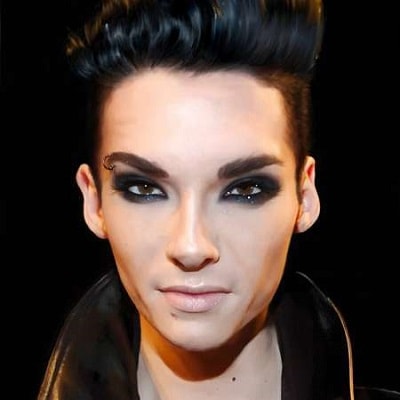 I am the author of my life. Unfortunately, I am writing in pen and can’t erase my mistakes.

Always listen to yourself. Believe in you and believe in what you do. And even when other people say you can't handle that.

Bill Kaulitz is currently single. Previously, he was in a relationship with girlfriend Natalie Franz, Rach L in 2008. After that, he has not been seen with anyone. Currently, he is focusing on his career rather than being in a relationship.

Who is Bill Kaulitz?

Bill Kaulitz is a German singer, songwriter, model, fashion designer, and voice actor. He along with his twin brother Tom Kaulitz are members of rock band Tokio Hotel.

Bill was born on September 1, 1989, in Leipzig, Germany. His birth name is Bill Kaulitz-Trumper. He was born to father Jorg Kaulitz and mother Simone Kaulitz.

He has an identical twin brother – Tom Kaulitz who is 10 minutes older than him. Their parents divorced when he was 7 years old. After that, his mother went on to date Gordon Trumper, guitarist of the German rock band Fatun. After 12 years of dating his mother married Gordon on 1 August 2009.

Bill holds German citizenship and his ethnicity is also German.

He was interested in singing since his young age, which was noticed by Trümper and helped the Kaulitz twins to start their own band. The twin began writing music at the age of 7.

The Kaulitz twins started live in Magdeburg performing at the age of 10 but the band lacked a drummer and bass player. Eventually, when Bill Kaulitz was 12 years old, he and Tom Kaulitz met bassist Georg Listing (then 14), and drummer Gustav Schafer (then 13). They named the band Devilish, but later renamed to Tokio Hotel.

Bill then auditioned on Star Search, a reality TV show, which got them recognized. After that, Tokio Hotel singed with Universal Music Group’s Interscope Records and released their debut LP Schrei in 2005. The single, Durch den Monsun, from the LP, reached number 1 in Germany followed by second album Zimmer 483 in February 2007.

Moreover, Bill Kaulitz has lent his voice of Arthur in Arthur und die Minimoys. In addition, he started to model and worked as a jury member in the 10th season of Deutschland Sucht den Superstar in 2010.

As a fashion designer he has designed clothes for Magdeburg -Los Angeles, shortly known as MDLA.

It seems Bill has not been awarded and nominated for her work till date. Hope, he will win awards and nominations soon.

Several women stalked the Kaulitz twins in early 2009 and even followed Tom Kaulitz to their parents’ home in Germany and attacked their mother.

Tom hit one of the stalkers in April 2009 at a gas station and drove off but the girl charged him for assault and he, in turn, filed a complaint against the girl on grounds of stalking. In December 2009 the charges were against Tom were lifted.

Also, he was rumored to have dated Kim Paradise in 2008. In addition, there have been speculations about Kaulitz’s sexuality and questions have been raised to ask if he is gay.