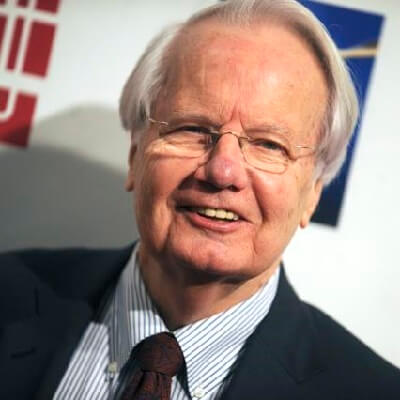 Bill Moyers is a married man. He is currently married to Judith Suzanne Davidson.

They were college sweethearts and after years of dating, the couple exchanged wedding vows on December 18, 1954. Moyers himself has stated that the marriage has not been smooth sailing and that they had to do a lot to keep it together for such a long time. This commitment also shows the couple’s devotion to one another and their 65-year long marriage is a testament to that.

From their long and healthy marriage, they have 3 children, two sons; William Cope Moyers and John Davidson Moyers; and a daughter, Alice Suzanne Moyers. They have also become grandparents to five grandkids.

Who is Bill Moyers?

Bill Moyers is a popular and respected American journalist and political commentator. He served as the 9th White House Press Secretary from 1965 to 1967.

He has also been extensively involved in public broadcasting and producing documentaries and news journal programs and is well received and respected as a journalist that can be trusted.

Bill Moyers was born on June 5, 1934, in Hugo, Oklahoma in the U.S. As of 2020 his age is 86. He was born to parents John Henry Moyers (father) and Ruby Johnson Moyers (mother). He spent his childhood days in Marshall, Texas. Bill was his parents’ only children.

Talking about his education, Moyers studied journalism at North Texas State College. For further studies, Moyers chose The University of Texas at Austin and in 1956 he graduated from there with a Bachelor of Arts degree in Journalism.

He also studied issues of the church and state and in 1959, completed a Master of Divinity degree at the Southwestern Baptist Theological Seminary in Texas.

Moyers began his journalism career at the young age of 16 as a reporter at the Marshall News Messenger back in East Texas.  Then in 1954, then-senator, Lyndon B.

Johnson employed him as a summer intern. He remained close with Johnson and even served as a top aide during Johnson’s unsuccessful bid for the 1960 Democratic U.S. presidential nomination.

Later, after Johnson took office in the White House, Moyers became his special assistant and served him from 1963 to 1967, while also serving as the White House Press Secretary from 1965 to 1967. Then in 1967, Johnson and Moyers parted ways and Moyers returned to Journalism.

After parting ways with Johnson, Moyers worked as a publisher at Newsday, a daily metropolitan newspaper from 1967 to 1970. He also worked for the Public Broadcasting System (PBS), CBS, and NBC News.

He also produced a series of News programs and documentaries during this time such as the Bill Moyers Journal, The Power of Myth Series, In Search of the Constitution, A World of Ideas, and many more.

His hard work in informing the society of its political concerns has not gone unnoticed though, which is seen by his collection of Awards which include a Lifetime Emmy Award, a Lifetime Achievement Award, over 30 Emmys and more than a dozen awards for his outstanding journalism. He was also elected to Television Hall of Fame in 1995.

He is also respected for his truthful commentary on the media and class welfare and on media bias.

Moyers has salt and pepper hair and a pair of brown eyes. He has not revealed his height and weight.

As of 2020, Bill Moyers has an estimated net worth of around $9 million. His salary as a TV host is unknown. However, when we consider that the annual salary of an average TV host is around $110k we can say that he made upwards of $120k annually at the least because of his popularity and respected status as a journalist.

Bill Moyers has consistently been in the limelight of the political world almost throughout his whole career. He has been a diligent, hard-working man throughout his career and is respected by the public for his truthfulness who hasn’t stirred any bad rumors or controversies surrounding him.

You may also like to read the Bio, Career, Body Measurements, Net Worth, Social Media, Relationships, and more about Troy Polamalu, Kimberley Strassel, Maurielle Lue, and more.