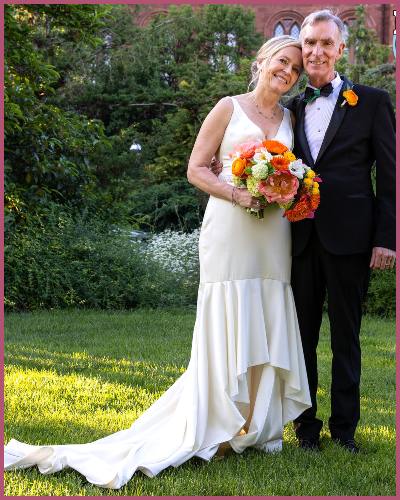 Who is Bill Nye ‘The Science Guy’ married to?

He got married to non-fiction writer Liza Mundy, 61 at the Castle Building’s Haupt Garden at the Smithsonian Institute in Washington, D.C.

The husband of the fellow at the New America Foundation helped her walk down the aisle in late May 2022. Their wedding ceremony was officiated by Star Trek star Robert Picardo, The Doctor from the series franchise.

Overall the marriage nuptials were joined by loved ones including Mundy’s daughter, Anna, Nye’s brother, Darby, and his old school friend of over 50 years.

The wedding looks of Mr. and Mrs. Bill Nye

Bill Nye, 66, wore a black tuxedo with an orange boutonniere, and his signature bowtie.

Moreover, he styled his father’s cufflinks with small blue stones in the center on his wedding day. He is an ideal son who recalled his late father who died in 1997 while exchanging wedding vows with a former Washington Post reporter.

The bride Liza Mundy donned a satin sleeveless dress while tying the knot in Washington DC. She was accessorized in a mermaid hemline, train, and jeweled belt.

Pete Souza, who served as a White House photographer for former President Barack Obama, was their wedding photographer.

The marriage news broke out immediately when she shared the couple’s picture on Instagram dated June 22, 2022.

When did the couple first meet?

Bill Nye met his wife Liza Mundy in 2017 after Mundy mentioned his mother in her book about code breakers.

Eventually, after getting a hint of the writings, Nye wrote an email to Mundy and things thus began to start. The couple, ever since made a few red carpet events together despite their aim to keep their relationship private.