Bill Rancic is an entrepreneur, author, and television personality. He has been married to TV personality Giuliana Rancic. 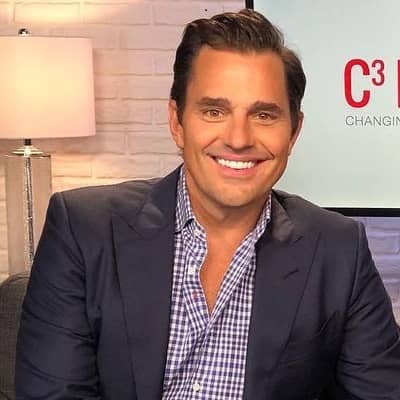 What is the relationship of Bill Rancic?

Bill Rancic has been married to TV personality Giuliana Rancic for 14 years. The couple first met in 2005 when Giuliana was asked to interview him after Bill won “The Apprentice”.

Shortly after, Bill proposed Giuliana on the 6th of December 2006 in Michigan Avenue. A year after, the couple tied the knot on September 7, 2007, on the isle of Capri. In 2011, Giuliana was diagnosed with breast cancer which made it risky for her to get pregnant.

Who is Bill Rancic?

Bill Rancic is an entrepreneur, author, and television personality. He was the first candidate hired by The Trump Organization at the conclusion of the first season of Donald Trump’s reality television show, The Apprentice.

Bill was born on May 16, 1971, in Chicago. His real name is Willian Rancic. He grew up in the suburb of Orland Park along with three siblings.

The name of his parents is Edward Rancic (father) and Gail Rancic (mother). He has three sisters named Beth Rancic, Katie Rancic, and Karen Rancic.

Rancic holds an American nationality and belongs to mixed ethnicity of Croatian and Irish.

In spring 2004, Bill appeared as one of the job applicants in the first season of The Apprentice. The reality show consists of 16 contestants hosted by billionaire business tycoon or former President, Donald Trump. In the final, he competed with Kwame Jackson where he won the show and immediately Trump hired him to take charge of the construction of the Trump Tower Chicago.

Bill co-hosted iVillage’s In the Loop with Village in September 2007. He is also the host of the A&E reality show, We Mean Business. Similarly, he established reality and scripted television-based production company, You and I Productions along with his wife. From 2009 to 2014, he appeared on the reality television show “Guliana and Bill”.

Aside from this, he is an author and published his first novel called “First Light” in 2016. Similarly, he has released the books such as  “You’re Hired: How to Succeed in Business and Life from the Winner of The Apprentice” (2004),  “Beyond the Lemonade Stand” (2005), “I Do, Now What? Secrets, Stories, and Advice from a Madly-in-Love Couple.” (2010).

Bill doesn’t have won any awards to date. He has been nominated for several awards such as Daytime Emmy Awards, Gracie Allen Awards, and Teen Choice Awards.

Bill has managed to maintain a clean profile till now. He hasn’t been part of any rumors and controversy that create headlines in the media.

Bill has accumulated a decent amount of fortune throughout his successful career. As of 2022, he has an estimated net worth of around $30 million, a combined net worth with his wife, Giuliana Rancic.

His salary is about $250,000 per year while working with the Trump Organization. Together, the couple has owned over a dozen homes in LA alone. In January 2019, they bought a home in Brentwood for $7.675 million. A year after, they sold this home in an off-market deal for $10.7 million, generating a $3 million profit for less than two years of ownership.

Similarly, their 5,000 square-foot Idaho lake house’s worth is around $3 to $5 million. He has several restaurants in Chicago including RPM Italian, River North District, RPM Steak, and RPM On the Water.

The 50 years old personality has an athletic body physique. He has an impressive height of 6 feet 3 inches tall. Likely, his weight is about 55 kg. He has brown pair of eyes and as well a brown hair color.