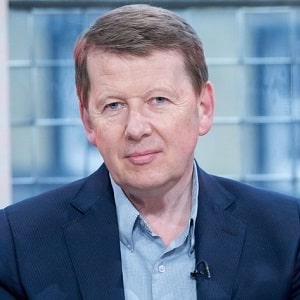 Bill Turnbull has been married to Sarah McCombie on March 26, 1988. They got married in the London Borough of Hackney. They were blessed with two sons, Henry in October 1988 and Will in October 1989 and with a daughter Flora in August 1991. The family used to live in Buckinghamshire but later relocated to Rainbow.

Who is Bill Turnbull?

Bill Turnbull is an English journalist and presenter. He currently works as a presenter for the radio station Classic FM and for the religious series ‘Songs of Praise’ and for game show ‘Think Tank’. He previously worked as the main male presenter of BBC Breakfast from 2001 until 2016.

He was born on January 25, 1956, in Guildford, Surrey, England. His birth name is William Robert Jolyon Turnbull and he is currently 63 years old. His father was of Scottish ancestry and his mother is of English ancestry.

He joined Eton College in Berkshire, followed by the University of Edinburgh, where he used to edit the student newspaper. And, he graduated from Cardiff University in 1978.

He traveled over thirty countries to enclose many international stories when he was in Washington Correspondent. He presented the regular programs on Radio 5 live.

Bill worked with Sian Williams initially in the BBC Breakfast and later worked with Sarah Montague, Carol Kirkwood, Mishal Hussian, and Susanna Reid. He joined Williams and replaced Dermot Mirnagham and became the main weekday presenter of Breakfast in 2008.

He also made his appearance in different TV programs besides anchoring and journalism. Bill paired with Karen Hardy and became a contestant in the third series of Strictly Come Dancing in 2005. He had his ankle injury but he continued the competition and ended up being sixth among twelve contestants.

He made his participation in a polyphasic sleep experiment presented on BBC One’s ‘The One Show’ and performed with BBC News presenters for Children in Need in November 2006.

On August 11, 2007, he made his appearance in an episode of the game show, School’s Out which was broadcasted on BBC One. He featured with his colleague Sian Williams in the celebrity version of ‘Who wants to be a Millionaire?’ to raise the funds for Marie Curie Cancer Care.

Bill went for chemotherapy for prostate cancer and after eight rounds of chemotherapy, he asked his consultant to release him form the treatment because he could not bear the pain any longer.

It is estimated that he has a net worth of around $9 million and his main source of income is from his professional career.

Bill Turnbull likes to keep his lips tight and does not want to express in front of others. He has not been involved in any rumors and scandals till date.

He is 5 ft. 8 inches tall and he has got light red hair and light brown eyes. Other information regarding his weight, shoe size, dress size, etc. are not available.