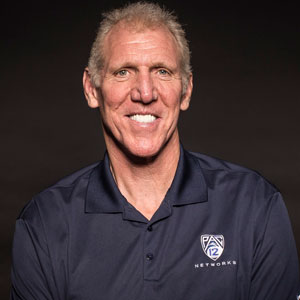 “I have been blessed with an extraordinary life.”

Bill Walton is married to his longtime girlfriend, Lori Matsuoka. She is a blogger and writes in BdaKiNE.com. The couple tied the knot in the year 1990. They do not have any children yet.

He was previously married to Susan Guth in 1979. They welcomed four sons and maned them as Adam, Chris, Nathan, and Luke. All of them became athletes but Luke had the most success with the game as he is the only to have played in the NBA. However, after ten years of their marital relationship, i.e., in 1989, the couple separated.

Who is Bill Walton?

Bill Walton is a former Basketball superstar, television sportscaster, and actor. He became famous after he played for John Wooden’s powerhouse UCLA Bruins in the early 1970s and won three successive College Player of the Year Awards.

He also played for NBA and considered himself as Most Valuable Player and won two NBA championships. Bill is also known for his acting in ‘Little Nicky’ in 2000, ‘Forget Paris’ in 1995, and ‘He Got Game’ in 1998.  He was significantly hampered by multiple foot injuries during his professional career.

He was born on November 5, 1952, in La Mesa, California, USA. His birth name is Willam Theodore Walton III. He is currently 68 years old.

His father’s name is William Theodore Walton and his mother’s name is Gloria Walton. He has got an older brother named Bruce Edward Walton, who was also a professional athlete. He holds American citizenship but his ethnicity is unknown.

He attended Helix High School and graduated from there in 1974. He played for the United States men’s national basketball team at the age of 17 at the 1970 FIBA World Championship. From 1971 to 1974, he played basketball for John Wooden at the University of California, L.A., and won the national title over Florida State in 1972.

He led the 1971-72 UCLA basketball team with a record of 30-0 and won by an average margin of 30 points. He was the main player in the win of two consecutive 30-0 seasons and he was also part of UCLA’s NCAA men’s basketball record 88 game winning streak.

In the 1973-74 season, the school lost with 71-70 to Notre Dame after the school’s 88 game winning streak. After his graduation in 1974 and the retirement of Bruin coach John Wooden’s retirement after UCLA’s 1975 national title, the future of UCLA came to the end.

He was immediately picked into the NBA Draft following his graduation and was selected as the number one overall by the Portland Trail Blazers. Bill has been tagged the savior of the franchise and was highly anticipated but he got a number of injuries to his nose, wrist, and foot and ruined the first two seasons.

Similarly, he became physically fit in the 76-77 season and he played around 65 games and led the NBA rebounds blocked shots per game. Again, he had foot injuries and he decided to quit the Blazers. He requested to be traded during the 77-78 offseason, but he was not offered and he had to sit out of the 78-79 season in protest. He joined the San Diego Clippers as a free agent after he was released.

Bill played just 14 games in two seasons at the Clippers and he went on several reconstructive surgeries on his foot. He had to be traded to the Boston Celtics after the 84-85 campaign after he was a marked improvement in his foot.

Despite his injury, he made the effort to return for the playoffs in 1987 but the injury occurred again causing him to sit out of the entire 87-88 season and he decided to retire in 1990 citing recurring injuries.

He gave his foot and ankle the chance to heal but it got worse and he had to have his ankles surgically fused. He was an amazing talent but he had to miss most of the games during his NBA career.

He won Emmy for his work on an environmental documentary filmed on location in the Philippines in 1979 and he was nominated for Man of the Year in 2003.

He has an estimated net worth of around $20 million and his main source of income is from his professional career.

He contemplated suicide due to the recurring pain and he was admitted on the air in June 2010.

He has a height of 7 ft. 2 inches and he weighs 95 kg. He has dark brown hair and dark brown eyes.