Billie Lourd is an American actress featured in Star Wars franchise. She is engaged and a mother of Kingston Fisher Lourd Rydell. 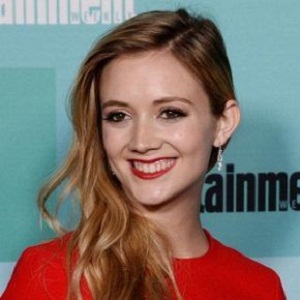 I am not a big horror freak. I'm a bit of a scaredy-cat in general. I can't handle scary movies unless I am at home with the lights on and the doors locked or it is in the morning

I am a Southern girl at heart, so I have a pulled pork sandwich and Key lime pie every day. It's a problem

I went to NYU, and my parents had a rule that I needed to major in something other than acting if I wanted to pursue acting after college.

Billie Lourd is engaged to her fiance Austen Rydell since June 2019. They started dating since 2017. The couple has a baby Kingston Fisher Lourd Rydell born in September 2020.

They had kept their pregnancy secret. Hope that they don’t keep their marriage secret!

Previously, she was in a relationship with Twilight star, Taylor Lautner. She is dating him since December 5, 2016.

Initially, the rumored affairs turned out to be confirmed relationships after they were seen hanging out together.

However, the couple broke up due to some differences.

Who is Billie Lourd?

Billie Lourd is an American actress. Presently, she is known for appearing in the horror-comedy series “Scream Queens” as Sadie Swenson.

Additionally, she is popular for playing in the 2015 film “Star Wars: The Force Awakens”. She played the character of Lieutenant Connix in the film.

She was born Billie Catherine Lourd on July 17, 1992, in Los Angeles, California, USA.

She was born to parents, Carrie Fisher (mother) and Bryan Lourd (father). Her father is a talent agent while her mother is a famous actress.

Billie belongs to a mixture of Russian, Scottish, Irish, and English ethnicity. She grew up in her home state. She didn’t have a normal childhood as she belonged to a celebrity family.

As per her education, she attended New York University. She studied religion and psychology there. Afterward, in 2014, she graduated from there.

Billie Lourd is active in the acting industry since 2015. She is both a TV and a film actress. She made her debut through the film. In 2015, she debuted through the famous film, “Star Wars: The Force Awakens”.

She played the popular character of Lieutenant Connix in the film. The same year she joined the cast of the horror-comedy TV series, “Scream Queens”. She portrayed the role of Sadie Swenson/Chanel #3. Afterward, in 2016, she returned for the second season of the TV series.

Presently, she is filming for an upcoming American biographical crime-drama film, “Boys Billionaire Club”. Additionally, she is also reprising her role as Lieutenant Connix in the sequel of “Star Wars: The Force Awakens”, “Star Wars: The Last Jedi”. Both of the films were released in 2017.

This actress’s estimated net worth is $20 million. Her 2019’s movie Booksmart has collected around $24.9 million at the box office.

Talking about the rumors and controversy of this talented actress Billie, currently, there are no desperate rumors regarding her personal and professional life.

Moving towards her body measurements, Billie Lourd has a height of  5 ft 1 inch and a weight of 53 kg.