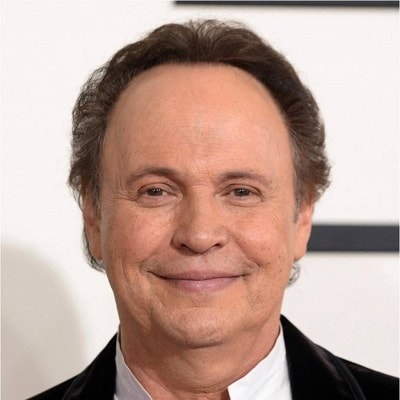 Women need a reason to have sex. Men just need a place.

[on hosting the Academy Awards] Whatever your approach, the world is a rough room. And it's a big room. Not everybody is going to like what you have to say. But when you're up there, look like you want to be there. You're the captain of show business that night. That's your job.

Billy Crystal is a married person. He has been married to Janice Goldfinger since June 4, 1970. The couple met the first time when they were at Nassau Community College.

The couple welcomed their first daughter Jennifer Crystal on January 26, 1973, and second daughter Lindsay Crystal on October 21, 1977. The couple is currently living together and they happily reside in the Los Angeles neighborhood of Pacific Palisades, California.

Who is Billy Crystal?

Billy Crystal is a famous American actor, writer, producer, comedian, director, and television host who is best known for his performance as Jodie Dallas on the ABC sitcom ‘Soap’.

He was born on March 14, 1948, in Manhattan, New York, U.S.A. His birth name is William Edward Crystal. He was born to mother Helen Crystal, a homemaker and father Jack Crystal, owner, and operator of the Commodore Music Store. Helen’s father Julius Gabler.

He has two older brothers and they are named as Joel and Richard Crystal. His father, Jack died at 54 years old, in 1963, after suffering a fatal heart attack while bowling and his mother, Helen passed away in 2001.

Crystal holds American citizenship and his ethnicity is Ashkenazi Jewish.

He joined Long Beach High School and graduated in 1965. After that, he joined Marshall University, on a baseball scholarship. However, the program was suspended during his first year at the college and then attended the Nassau Community College.

During the initial stage of his career, he performed solo in ‘The Improv’ and ‘Catch a Rising Star’. He came into limelight after he appeared in the TV series ‘Soap’ which he played from 1977 to 1981.

Furthermore, she directed the movie ‘61*’ (2001) which also helped her to gain more popularity.

He has an estimated net worth of around $45 million and he has earned that sum of money from his professional career. His career has given him not only fame but a huge fortune. He is living a lavish life.

The host also made a controversial racial joke after Octavia Spencer won the best-supporting-actress award for her performance in The Help and the ceremony as a whole was panned by critics.

Billy Crystal has blue eyes and light brown hair. Also, he has a height of 5 ft. 7 inches and weighs 70 kg. Other body measurements of this actor are unknown.

Billy Crystal has around 658k followers on Twitter but he has hidden his Instagram fan followers. Also, he does not seem to be active on Facebook.