Billy Gardell is an American actor, host, and stand-up comedian. He is is married to Patty Knight. The couple also has a son Willian III.

Gardell is a married man. The comedian is married to Patty Knight since 2001. 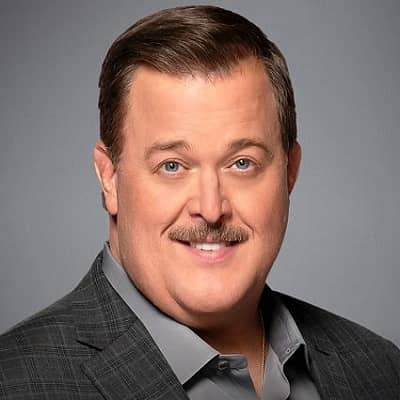 You need a wisecracking buddy standing next to you? That's the role for me. You got the guys who are knock-down, drag-out handsome. That's what people want to see. Let that guy be the hero. But there's always a role for the Everyman.

Who is Billy Gardell?

Billy Gardell is an American actor, host, and stand-up comedian. He has featured in various movies like Quintuplets, Desperate Housewives, and Bones.

Moreover, the actor also presents himself as a host in The Late Late Show and Monopoly Millionaires’ Club.

The comedian was born on August 20, 1969, in Swissvale, Pennsylvania, U.S. His birth name is William R. Gardell. He is of English origin.

The names and information about his parents are not known. They get divorced when Gardell was at a young age. After that he along with her mother and younger sibling moved to Florida.

Gardell has a sister Lisa Gardell and a twin brother Brian Gardell. Brain owns a pizza restaurant in Orlando.

He was just 15 yrs when he started working at a department store warehouse.

In his initial days, Gardell worked at department stores and also has various works to maintain his financial instability. In around 1987  he worked in cleaning bathrooms, seating people. As well as he served at a local club, Bonkerz answering phones.

It was on December 28 when Gardell started performing at the comedy club’s open-mic nights. He was 17 yrs old when he did his first stand-up comedy act. Likewise, his professional comedy career began with “Bonker”.

His first comedy album was “Billy Gardell: Throwback” in the year 2006. Billy then appeared in various movies like “You, Me, and Dupree”, “Avenging Angelo”, and “Bad Santa” “Bad Santa”, and many others.

Similarly, Gardell then also has various recurring roles in television series like “Heist”, “The King of Queens”, “My Name is Earl”, “Lucky”, “Bones”, “Monk”, “The Practice”, “Dear”, and many others.

Gardell became the host of the TV series “Pizza Talk” and also “Monopoly Millionaire’s Club”. In 2018, he was also part of the situational comedy “Young Sheldon”. He portrayed the lead role of Robert “Bob” Wheeler in the 2019 Tv show Bob Hearts Abishola.

Starring in various films, series, and performing stand-up comedy, Gardell has amassed a net worth of around $1o million as of 2021.

Talking more, his salary is estimated at around $941,176 annually. Moreover, the actor also earns around $209, 150 from various sponsorship and brand endorsements.

Gardell has always stayed out of media when it some to his personal life. He hasn’t been involved in any types of controversial activities or rumors in the media.

Gardell stands with a height of 5 feet and 11 inches. He has blue-colored eyes with dark brown hair.

The comedian shared that he was a heavyweight of about 158 kg.  It has decreased now and he weighs 92 kg.  He has colored hair with beautiful eyes.

You may also read the bio of Paul Rodriguez, Rudy Mancuso, Marsha Warfield, and Charlie Murphy.