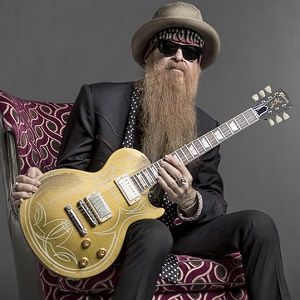 Sounds like the blues are composed of feeling, finesse, and fear.

It's important to collect unusual characters. It keeps you sharp.

Billy Gibbons is married to Gilligan Stillwater on the 1st of December, 2005.

Billy and Gilligan dated for a while before they walked down the aisle.

Who is Billy Gibbons?

Billy Gibbons is an American guitarist and lead vocalist of the American Rock band ZZ Top. Besides this, he is also a singer, songwriter, actor, and producer too.

He is best known for his acting in crime drama series Bones. Furthermore, he was ranked 32 on Rolling Stone 2011 list of 100 Greatest Guitarists Of All Time.

Billy Gibbons was born in Houston, Texas, USA on December 16, 1949. His parents were Frederick Royal (“Freddie”) and Lorraine (née Duffy) Gibbons of English, Scottish and Irish ethnic background. He grew up in Houston, Texas.

He was educated from Warner Brothers’ art school in Hollywood, California. At the tender age of 14, he formed the band which includes The Saints, Billy G & the Blueflames, and The Coachmen.

After forming the band at the age of 14, he then officially named the band Moving Sidewalks which was inspired by fellow Rocky Erickson and The 13th Elevators.

He and his band rose to prominence during Jimi Hendrix first American tour as a headliner. After that, he wrote a song called 99th Elevator and released a full-length album Flash (1969).

Later, he was seen on collaborating with many bands and performing in many shows. His famous and hit singles albums include Tres Hombres, Fandango!, Cheap Sunglasses and I Thank You among the others.

Besides lead guitarist, vocalist and songwriter he has acted in TV sitcom Bones.

He has an estimated net worth of $60 million.

Talking about rumors, many of his fans assumed that he has a daughter named Angela Montenegro. But actually, this name is of the fictional character from TV drama Bones in which he played the dad’s role of the same character. Besides this, Billy Gibbons is free from any other rumors and neither was involved in any controversy in the past or at present.

Gibbons stands 5 feet and 9 inches tall and weighs around 78 kg. He has light brown eyes with a fair color of hair.

Gibbons is active on Facebook with over 171.9k followers and over 68k followers on Instagram. However, he has a mere 10.7k followers on Twitter but he is active here too and 12.7k subscribers on Youtube channel.