Bjorn  Ulvaeus is a producer and songwriter from Sweden. He is married and a father of two. 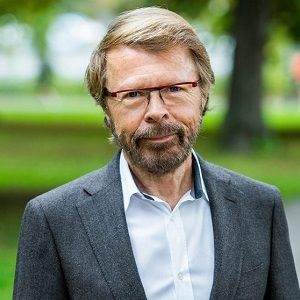 Stockholm is unique in that it's built on islands and surrounded by water, so you get this enormous sense of freedom. It's got everything you could possibly need - everything New York or London has but without all the people and traffic. It's also become a very creative city, not only for music but also for fashion and computer games.

Sweden is an open, liberal, secular and democratic country. We strive towards achieving equality

we are forward-looking and refuse to be pulled back by social constructs such as religion.

All these years later, I have almost no memory of the shows themselves. It's a blur. I remember my jogging runs better - that was my way of getting my energy together. I used to try to get to the arena as late as possible

otherwise, I'd just be pacing around, waiting to go on.

What is the relationship of Bjorn Ulvaeus?

Bjorn is married twice in his life. Initially, he was married to Agnetha Fältskog on 6 July 1971. Together, they also welcomed two children, Linda Elin Ulvaeus and Peter Christian Ulvaeus. However, the couple couldn’t carry their relationship for too long and broke up in 1978 and divorced in 1980.

On January 6, 1981, he tied the knot with music journalist Lena Källersjö. Later, they have also welcomed two daughters, Emma and Anna. So far, there is not even a single rumor of dispute between the couple. As of now, they have maintained a sound relation between them and living elegantly.

Who is Bjorn Ulvaeus?

Bjorn  Ulvaeus is a producer and songwriter from Sweden. He is popular being the former member of the Swedish musical group ABBA. Furthermore, he has also co-produced the film, Mamma Mia! Besides this, he has also co-composed Chess, Kristina från Duvemåla, and Mamma Mia!.

Bjorn was born on 25 April 1945, in Gothenburg, Sweden. As a child, he moved to Vastervik along with her family. He is the son of Aina and Erik Gunnar Ulvaeus. There is not much information regarding his childhood and early life.

Talking about his education, the Swedish sensation completed his graduation in business and law from Lund University.

Bjorn began his career a member of the Swedish folk-schlager band Hootenanny Singers. At that time, Hootenanny singers were the popular band of Sweden. Later, they collaborated with the Hep Stars. During that time, he met with the band’s keyboard player, Benny Andersson and became a close friend. Soon after that, the dup composed their first song named “Isn’t It Easy To Say” followed by “A Flower In My Garden” and “Ljuva Sextiotal”. In 1969, he met 18-year-old singer-songwriter, Agnetha Fältskog. Bjorn and Benny Anderson launched their two songs Chess and Mamma Mia!.

At the time with Hootenanny Singers, they released  “Omkring Tiggarn Från Luossa”, a cover of an old folk-schlager song in 1970. Besides this, it also ranked on the chart for 52 consecutive weeks, in which had Bjorn vocal and Benny’s piano. In 1974, ABBA had won the 1974 contest in Brighton, UK. Furthermore, Bjorn had also made an appearance in a special comedy video made for the interval act, named “Our Last Video”. On May 18, 2013, Bjorn and Benny performed a song in the 2013 Eurovision Song Contest in which Avici has also collaborated.

Being a legendary musician, Bjorn bags a massive amount of money from his profession. Currently, he has a net worth of $300 million as of 2022. Furthermore, he has been also living a luxurious life.

So far, Bjorn has won several awards in his music career. Bjorn along with Benny has received “The Special International Ivor Novello Award” from the British Academy of Songwriters, Composers, and Authors. Moreover, they had also won “The Music Export Prize” from the Swedish Ministry of Industry and Trade followed by “Lifetime Achievement Award” from the Swedish Music Publishers Association. Apart from that, they had also got nominations for the Drama Desk Award and Tony Award. Additionally, the duo has was also nominated for the Grammy Award.

Once, there was a rumor regarding the reunion of ABBA. Apart from that, he has never been the topic of controversy till date. Furthermore, there are not any drastic rumors regarding her personal and professional life.

Bjorn has a height of 5 ft 10 inches and his weight is unknown. Furthermore, he has beautiful blue eyes and light brown hair. There is no information about his shoe size and dress size.