Updated On October 1, 2021 | In Child , Lifestyle , Relationship
Share this 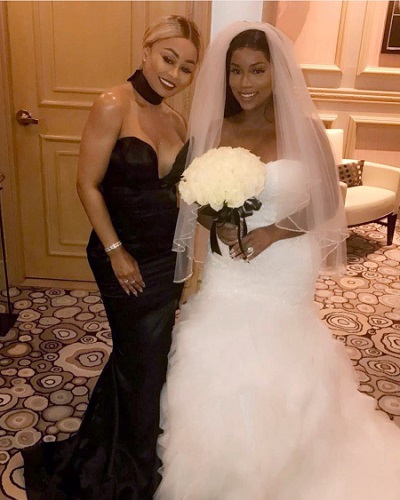 Five months ago, Blac Chyna gave birth to her daughter Dream with her husband Rob Kardashian. Now, mom of one is all set to make the body after the baby. The mom of one posted the snap a video of her scale on Snapchat in March, showing that she’s now at 141.6 lbs., which is 51 lbs. down from her highest pregnancy weight of 192 lbs. Recently, she attended her friend Kendra Cooksey’s wedding in Las Vegas. The interesting part is that her dress in the occasion was something which grabbed all the eyeballs towards her.

Recently, the model attended her friend’s wedding. The dress she wore became the center of attraction on the occasion. Blac wore a revealing black gown at her friend Kendra Cooksey’s wedding in Las Vegas on Friday, May 12. The gorgeous model looked stunning in a low-cut, cleavage-baring, strapless black dress with a matching choker. In the addition of her beauty, she matched her dress with wore her long, blonde hair in a ponytail. She shared the picture on the Instagram with the caption which reads:  “Congrats Mrs. Cooksey @kendrasboutique,”

At the evening time of the very same day, the mom of one documented the whole movie enormously on her Snapchat account. The clip she shared shows, she danced her way into the venue while holding up her dress to avoid a potential wardrobe malfunction.

Followingly, in another snap chat video she says:

“You know how blessed I am to be at my sissy’s wedding? Aww, congratulations! I love you.”

In the ceremony, she participated in Mannequin Challenge on the dance floor as the DJ played Rae Sremmurd’s hit “Black Beatles” with all other guests.

After the wedding, she shared her pictures on Instagram in which you can see her in a black lace bodysuit, likely for an afterparty.

Rob Kardashian shares the sweet snap of her daughter Dream

Daddy’s little girl. Rob Kardashian took to Instagram to share an adorable photo of daughter Dream with his nearly 9 million followers on Sunday, April 9. In the picture, 5-month-old Dream stares sleepily at the camera as she lies snuggled in her crib, clad in elephant-print sheets.

“Somebody is awake woohoo…look at that face lol,”

the Keeping Up With the Kardashians star captioned the photo, followed by an angel emoji.

Dream looked as cute as can be in a pink baby sleeping bag with what looked like soft toys on either side of her. With her dark curly hair framing her face sporting some adorable bedhead and giving off distinct vibes of her father’s eyes and nose, the tiny tot stared up at the Keeping Up With The Kardashians star. Read the full story here…

The model and entrepreneur Blac Chyna has been into multiple relationships. She was in a relationship with American rapper Tyga from 2011 to 2014. She has a son King Cairo Stevenson with him. They soon separated. She supposedly was also said to have romantic involvements with American business professional Johnny Winn, with American professional boxer J Leon Love (2015) and with a married American NBA superstar, P.J.Tucker (2015). It was said that the player’s wife Tracey was not very happy on learning about the seductive antics of Blac Chyna.

Blac Chyna has been in an on-off relationship with the Kardashian scion Rob Kardashian since January 2016. They got engaged in April 2016 and one month later announced that Blac Chyna was pregnant. She gave birth to a beautiful daughter, Dream Renee Kardashian on 10th November 2016. She was also believed to be dating Hip-hop artist French Montana. Read the full story here:

Blac Chyna is an American model and entrepreneur. Due to her frequent appearances in hip hop music videos, she is known as “video vixen”. In 2014 she launched her own makeup brand with a beauty salon in Encino, Los Angeles. More Bio…

Rob Kardashian is an American television personality and businessman. He is best known for featuring on Keeping Up with the Kardashians, a reality TV series centering upon his family, as well as appearing on its spin-offs. In 2011, Kardashian also competed in the thirteenth season of ABC’s Dancing with the Stars, during which he placed second. See more bio…

Beach Babes in the Bikini! Priyanka Chopra walks around with Adriana Lima around the beach on a swinsuit
Tags : enterpreneur Model