Posted by MarriedBiography Posted on July 30, 2020 | In Dating , Net Worth , Relationship
Share this 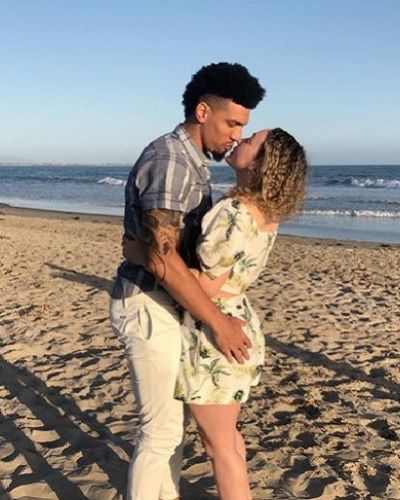 Blair Bashen is the fiance of NBA player Danny Green. She is a former Purdue volleyball player. Bashen is from Houston, Texas. During her high school years in St. John, she became three-year letter winner in volleyball. She was named all-conference each of the last two years and led the team in blocks during the sophomore campaign.

She was honored with Athletic Excellence, for demonstrating honor, leadership, a higher skill level, and good sportsman-like conduct after junior and senior seasons. Also, she earned All-South Zone honors in her freshman and sophomore years.

Blair was born on 7th February 1989 in Houston, Texas. She is the daughter of Steve Bashen and Janet Bashen. Similarly, she has a brother Drew Bashen who is studying computer science.

Blair Bashen and Danny Green are together for almost five years. On Danny’s birthday, Blair paid tribute to him and wrote,

“To know him is to love him! You deserve everything you’ve achieved in your 32 years and sooo much more in the future! I feel like one of the luckiest girls in the world to have u in my life. Happy birthday to my two-time champion!! I love you,”

They got engaged on 14th June 2020. Danny proposed to her at Surfer’s Point in Ventura. He went down on one knee and proposed her with an engagement ring. Looking at the picture, Bashen was not expecting it and was surprised. Danny shared the happy news on Instagram and wrote,

“To My Fiancé,
I’ve admired you first as a friend for two years, I’ve loved you for half a decade as my boyfriend, and now I can’t believe you are my future husband!! I will continue to reminisce about the countless good times in our past, fully enjoy our present, and positively embrace our future.”

How much is the net worth of Blair Bashen?

Blair Bashen, the Purdue Volleyball Alumna has an estimated net worth of $500 thousand. Her fiance Danny has an estimated net worth of $12 million. He re-signed the contract with the Spurs for $12 million on 11th July 2012. Again on 14th July 2015, he re-signed with the Spurs for four years worth $45 million. His annual salary in 2019 was $10 million.

He has a house in San Antonio home in La Cantera which has four bedrooms and three bathrooms. Its build on a 3,450-square-foot former abode at 4119 Muir Wood Dr. is going for $485,000 and features heated flooring, a movie theater, and a crystal chandelier.

Blair Bashen has around 24.4k followers on her Instagram account. She is following personalities like Richard Mille, Fenty Beauty by Rihanna, Pallas Couture, Michael Ojo, Nikko Hurtado, Jennifer Lincoln, Shaun King, Hannah Bower, and many others.

On 13th February 2013, she wished her mother on her birthday and wrote,

“Hope my amazing Mom had a great Birthday today!!! She is so hard working and the best mom and business woman in the world!! Love my mama!!!! “

Her first Instagram post was uploaded on 9th May 2012. Bashen likes hanging out with her friends and family. She became Purdue Graduate in July 2012. She has uploaded many posts since 2012. Blair is a dog lover and has two dogs Gizmo and Nuke. She calls her dogs her best friends.

Daniel Richard Green Jr. is an American professional basketball player well-known as Danny Green. He plays for the Toronto Raptors of the National Basketball Association (NBA). Similarly, he won an NBA championship with the San Antonio Spurs and became the third player from UNC to win an NCAA championship. Read more bio…