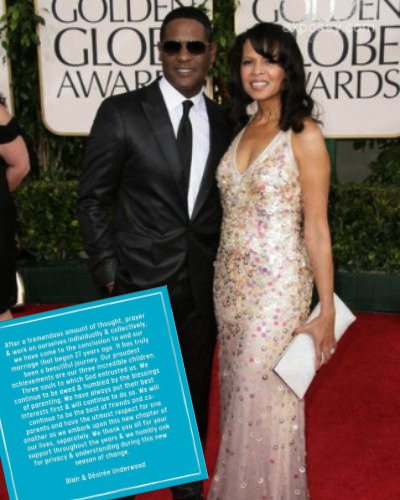 Blair Underwood and Desiree DaCosta are getting divorce

The American actor and Desiree DaCosta announced they are ending their marriage of more than 2 decades. This Sunday they released the joint statement announcing their split calling it a ‘beautiful journey’. The former couple has two sons Paris, Blake, and a daughter Brielle. They asked for privacy and understanding during the time of change in their lives. Underwood and DaCosta also talked about parenting and their relationship in the future. Here is all you need to know about the couple and their split statement.

After more than two decades of marriage, parents of three decided to end their marriage. They released a joint statement on Sunday through their Instagram account. In their statement, they mentioned they came to the decision on a mutual understanding. Furthermore, they wrote:

”It has truly been a beautiful journey. Our proudest achievements are our three incredible children. Three souls to which God entrusted us. We continue to be awed & humbled by the blessings of parenting. We have always put their best interests first & will continue to do so. We will continue to be the best of friends and co-parents and have the utmost respect for one another as we embark upon this new chapter of our lives, separately.”

They also asked their fans and friend to give them privacy and support on their new season of change. Meanwhile, they also thanked their fans for their love and support throughout the years. Underwood tied the knot with his former wife on September 17, 1994, and welcomed three children together.

Their relationship throughout the years

Blair and Desiree were married for more than 2.5 decades before they split up. They welcomed their first son on September 17, 1994. They welcomed their second son Blake on September 17, 1994, and daughter Brielle in 1999. On 17th September 2019, Underwood and DaCosta celebrated their 25th anniversary in the Bahamas. They also shared some of the amazing pictures together with some of the close-up selfies from their vacation spot.

Though being married to a famous actor, DaCosta likes to stay away from the spotlight. Meanwhile, the actor shares family pictures from their exotic vacations and family time on his Instagram. He also often praised DaCosta on his social media. As the couple ended things on a good term, they will remain friends amid the split and co-parent their children together.

Blair Underwood is an American television, film, and stage actor and director who has played the role of attorney Jonathan Rollins on the NBC legal drama L.A. Law for seven years. Likely, he has also appeared in The New Adventures of Old Christine, Dirty Sexy Money and In Treatment, The Event, Quantico, and Andrew Garner in Agents of S.H.I.E.L.D. See more bio…