Posted on September 6, 2021 | In Married , Relationship , Wedding
Share this 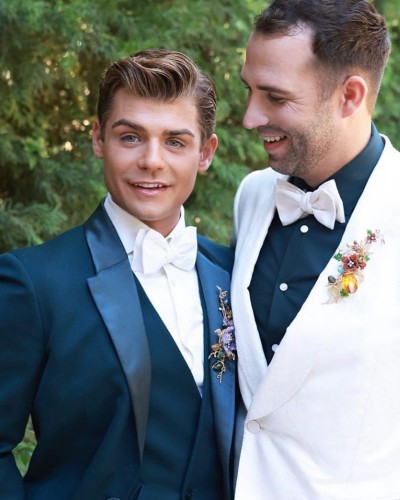 Blake Knight and Garrett Clayton are officially husband and husband! The couple finally married each other after their three failed attempts. Their wedding was a garden party-themed affair held on 4th September 2021. They had to postpone their wedding twice due to the Covid-19 pandemic.

Blake and Garrett officially walked down the aisle at a private residence in Los Angeles over Labor Day weekend. Likewise, their wedding venue is a part of the Walt Disney estate where they dressed up with flowers from Commerce Flowers. The love birds of more than 10 years donned in bespoke Zegna suits for the ‘I do’ ceremony. It was a grand ceremony attended by 160 friends and family members.

They wanted a simple wedding so they did not have a wedding party. Knight and Clayton made their moms walk them in from opposite sides of the archway where they met to exchange vows. Their nuptials is officiated by actress Alicia Silverstone.

“We’ve been trying to get married for a long time. So we’re just excited.”

More on the Blake Knight and Garrett Clayton’s wedding

The after ceremony continues on a big lawn where the guests were indulged in games like bocce ball, croquet, oversized Connect 4, and giant Jenga. They served three signature cocktails: a mint julep, an Aperol Spritz, and an Aviation. Their garden party was planned by Jason Mitchell Kahn. Garrett revealed,

“We really wanted the wedding to be fun. Not just fun for us, but fun for everybody.”

Similarly, the guests were given face masks with their place cards were arranged in a picnic-style meal to avoid cross-contamination with the food service. They wanted to make all the attendees feel safe and not worry about the Covid-19. For the cake, they went for a traditional wedding cake and Coolhaus ice cream truck to offer a refreshing treat.

Also, the married couples are going to wait for six months to enjoy their honeymoon to The Maldives and Japan. They set an example by taking their decade-long relationship to marriage. Their wedding ceremony was all they ever wished for. Blake said,

“We’re lucky that we’re in a place now that we can actually share our lives together both privately and publicly.”

Garrett Clayton is an American actor and singer. He is known for playing a recurring role in the first season of the family drama series, The Fosters.

Likewise, he is represented by Industry Entertainment Productions, LLC.

Hollywood Actors Who Started Out Small And Made It Big After Struggle!
Tags : Actor Singer