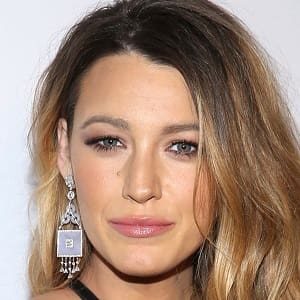 I've kissed just three people in my life, other than stuff I have done for TV or movies. I know, I'm weird! I hope Brad Pitt doesn't hear this, he is never going to want to marry me!

I want to have a brunch place, a bakery, and a Southern restaurant - because my family's from Georgia - and then I want a place that is all-over-the-world cuisine. I take a cooking class everywhere I travel. I find it's the best way to get to know a culture. It's what people bring to the family every day, what they break bread over - it's a very intimate thing.

I want babies. Lots of babies. Of course!

Yeah, I don't comment on my relationships... My anonymity is something I treasure. Wanting to be an actor and wanting to be famous are different.

What is the relationship of Blake Lively?

Blake is currently a married woman. She is married to actor Ryan Reynolds. The pair married on 9 September 2012. They have three daughters together: James born in 2014, Inez born on September 30, 2016, and Betty Reynolds born on 4th October 2019. The couple announced the news of their fourth baby.

The Gossip Girl alum made fans go crazy when she debuted her baby bump at the 10th Annual  Forbes Power Women’s Summit.

Blake Lively was in a relationship with Kelly Blatz from 2004 to 2007.

She was also in a relationship with actor Leonardo DiCaprio in 2011.

Who is Blake Lively?

Additionally, she has also appeared in several other movies including ‘The Sisterhood of the Traveling Pants,’ ‘The Age of Adaline, and ‘A Simple Favor’ among others.

Lively was born in Los Angeles, California as Blake Ellender Lively on August 25, 1987. She was born to parents Elaine and Ernie Lively. Her father was an actor.

Additionally, she has an older brother, Eric Lively. She also has half-sisters, Lori Lively, and Robyn Lively. Blake became interested in the world of acting during her childhood years as her parents took her to art classes as a child.

Blake is of American nationality. Furthermore, she belongs to a mixed ethnic background of English, Scottish, German, Irish, Welsh, and French-Canadian.

Lively initially appeared in ‘The Sisterhood of the Traveling Pants’ in 2005 as Bridget. Previously, she had the role of Trixie / Tooth Fairy in the movie ‘Sandman.’

In 2006, Blake appeared as Monica Moreland in Accepted’ and Jenny in ‘Simon Says.’ Since then, she has appeared in numerous other movies and television series. All in all, she has over 20 credits as an actress.

Some other movies and television series that Lively has appeared in are ‘A Simple Favor, ‘All I See Is You, ‘The Shallows’, ‘Café Society, ‘The Age of Adaline’, ‘Gossip Girl, ‘Savages’, ‘Hick’, ‘Green Lantern’, ‘Saturday Night Live’, ‘The Town’, ‘The Private Lives of Pippa Lee, and ‘Elvis and Anabelle’ among others. Lively was named the new face of L’Oreal in October 2013

. Additionally, she launched a digital magazine and e-commerce website titled ‘Preserve.’ Furthermore, Blake also has one credit as a producer.

Lively won the Saturn Award nomination in 2016 for her performance in ‘The Age of Adaline.’ In addition, she won the CinemaCon Award and NBR Award, and People’s Choice Award. All in all, she has 8 wins and 21 nominations for various awards to date.

Lively has not revealed her current salary. However, she has an estimated net worth of around $16 million at present.

Lively became part of a controversy after she was termed racially insensitive and tone-deaf after she posted one of her pictures on Instagram with the caption ‘L.A. face with an Oakland booty.’

Additionally, her wedding venue was also controversial. The couple married at Boone Hall, near Charleston, South Carolina. At present, there are no rumors concerning Lively and her career.