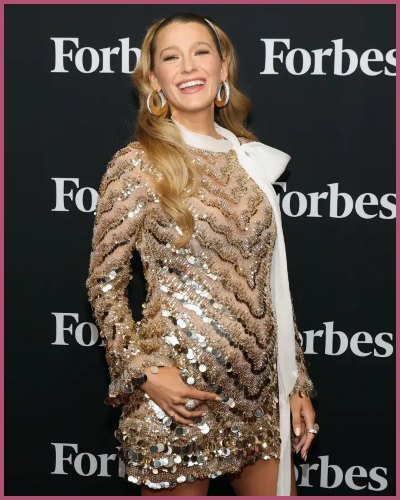 Congratulations are in order for Blake Lively and Ryan Reynolds who recently announced the news of their fourth baby.

The Gossip Girl alum made fans go crazy when she debuted her baby bump at the 10th Annual  Forbes Power Women’s Summit on Thursday in New York.

The mom of three looked happy as she cradled her growing bump in a gorgeous sparkling gold dress.

The power couple has yet to announce the good news on social media.

The pregnancy news came as a massive surprise as one of Lively’s last Instagram posts in August showed her flat stomach in a white bikini.

The Age of Adaline star, however, did not make it clear when the picture was taken.

Also, Read Blake Lively and Ryan Reynolds are Still Strong After 10 Years Together!

Lively and Reynolds have a love for a big family

The power couple married in September 2012 and two years later they welcomed their first child, James.

Their family grew bigger when Inez and Betty were born in 2016 and 2019, respectively.

In 2021, Reynolds, who is a devoted father to his angels revealed that he was taking a  break from acting to focus on his family life.

Two months later, in yet another interview, the  actor said:

“I want my kids to have a pretty normal schedule,”

“I think it’s totally important for their development and I really enjoy being a present dad. I love taking them to school in the morning, I love picking them up.”

The Green Lantern costars have been very open about their plans for a  big family. This was because both of them came from large families.

“If I could spit out a litter of kids, I would,”

She later revealed her love for a big family and  said:

“A lot of people say it’s crazy, but we’ll only know when we’re there, you know? We’ll walk through that fire pretty happily, I think.”