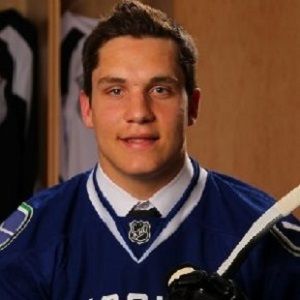 Bo Horvat is an unmarried man till now. However, it is revealed that he is currently in an affair with a girl named Holly Lynne. He said that she is the one who takes a lot of heat from him when he is feeling low or is having a bad day. They are in a relationship for around six years. They met for the first time at Western University in London, Ont. Holly’s cousin was his roommate.

Who is Bo Horvat?

Bo Horvat is a Canadian ice hockey player. He currently plays as a center-forward for the Vancouver Canucks of the National Hockey League (NHL). He is an alternate captain of Vancouver Canucks.

Bo Horvat was born as Bowie William  Horvat on April 5, 1995, in Rodney, Ontario, Canada. Bo is a Canadian by nationality and he is of North American ethnicity.

He is the son of Tim Horvat(father) and Cindy Horvat(mother). His father is a former hockey player who also played major junior with the London Knights. He has a younger brother named Cal Horvat, who is also a hockey player.

There is no information on his education background.

Bo began his ice hockey career as a club player at the age of 12, playing for the Toronto Red Wings. He won the all-Ontario Peewee AAA championships in 2008. In the 2011-12 season, he was selected 9th overall by the London Knights in the 2011 Ontario Hockey League (OHL) Priority Selection Draft.

He scored a goal in his OHL debut on September 23, 2011, in an 8-0 win over the Saginaw Spirit. At the 2013 NHL Entry Draft, he was taken ninth overall in the draft by the Vancouver Canucks. With the club, he signed a three-year, entry-level contract on August 6, 2013. He made his NHL debut on November 4, 2014, against the Colorado Avalanche. He scored his first NHL goal on November 20 against Frederik Andersen of the Anaheim Ducks.

In March 2017, Horvat was named as one of Vancouver’s second alternate captains. Horvat first played for Team Canada at the 2011 Canada Winter Games. The following year, he captained Team Ontario at the 2012 World U-17 Hockey Challenge to a bronze medal. He also played for his national team at the 2014 World Junior Championships in Malmo, Sweden.

Bo Horvat: Salary and Net Worth