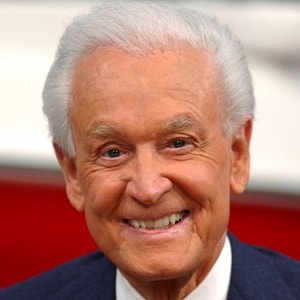 I can tell you that I'd rather be kissed by my dogs than by some people I've known.

Don't go to them, do not go to movies in which there are animals, because if you do, you are subsidizing animal cruelty.

You cannot accept that . . . when you see animals in pictures, you are putting them at risk.

I'm a vegetarian - I think there's a strong possibility, had I not become a vegetarian, I would not be working now. I became a vegetarian about 25 years ago, and I did it out of concern for animals. But I immediately began having more energy and feeling better.

Bob Barker was previously married to Dorothy Jo Gideon. The pair were together for 36 years from 12 January 1945 to 19 October 1981 until Gideon’s death. Barker has not married since then. However, he was in a relationship with model Dian Parkinson from 1989 to 1991. At present, he is believed to be single.

Who is Bob Barker?

Bob Barker is an American former television game show host. People mostly know him as the former host of CBS’s ‘The Price Is Right’ from 1972 to 2007. Additionally, Bob Barker also served as a host of ‘Truth or Consequences’ from 1956 to 1974.

Barker was born as Robert William Barker in Darrington, Washington on December 12, 1923, to parents Matilda Valandra and Byron John Barker. His father was the foreman on the electrical high line and his mother was a school teacher. Additionally, he has a half-brother, Kent Valandra. He is of American nationality. Furthermore, there are no details available about his ethnic background at present.

Barker initially served in the United States Navy as a fighter pilot. He worked his first media job, at KTTS-FM Radio. Next, he also worked at nearby WWPG 1340 AM in Palm Beach. He got his own radio show, ‘The Bob Barker Show’ after moving to California. From 1956 to1974, Barker hosted ‘Truth or Consequences’. Additionally, he also hosted ‘End of the Rainbow’ from 1957 to 1958. He has also hosted ‘The Family Game’, ‘Simon Says’, ‘That’s My Line’, and ‘The Price Is Right’.

Furthermore, Barker has also appeared in several other movies and television series. He played himself in ‘Happy Gilmore’. In addition, he has appeared in other movies and television series including ‘SpongeBob SquarePants’, ‘Unscripted’, ‘WWE Raw’, ‘How I Met Your Mother’, ‘Futurama’, ‘Something So Right’, ‘The Nanny’, and ‘Overlanders’. He has also worked as a producer for ‘The Price Is Right’, ‘The Price Is Right Million Dollar Spectacular’, and ‘The Price Is Right Salutes’ among others. He is an animal rights activist and has donated a large sum of money to PETA. Additionally, he has also written an autobiography titled ‘Priceless Memories’.

Barker has won the Daytime Emmy Awards several times in his career. Additionally, he has also won OFTA Television Award and MTV Movie Award. All in all, he has 23 wins and 30 nominations to his name to date.

Barker has not revealed his current salary. However, he has an estimated net worth of around $ 70 million at present.

Barker has been involved in several controversies in his career. He stirred controversy after Dian Parkinson filed a lawsuit against him in 1994 alleging sexual harassment. Additionally, model Holly Hallstrom filed suit against Barker for wrongful termination and malicious persecution in 1995. He also became part of a death hoax rumor recently.

Talking about his body measurement, Barker has a height of 6 feet 1 inch (1.85 m). Additionally, he weighs around 85 kg. Furthermore, his hair color is grey and his eye color is blue.

Barker is not active over the social media. However, his page ‘The MV Bob Barker’ has more than 81k followers on Facebook.