Bob Hoskins was an English actor. He is married and a father of four. 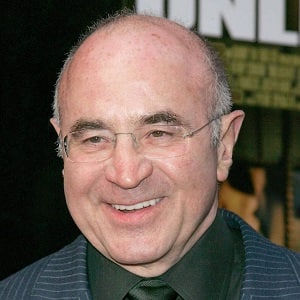 Most dictators were short, fat, middle-aged and hairless. Besides Danny DeVito, there's only me to play them.

My own mum wouldn't call me pretty.

I've watched films and even forgotten I'm in them.

Family's all I've got. I've got money, yeah, but it's my family that I care about.

[on Neil Jordan] I think Neil is a magician. And I believe in magic.

What is the relationship of Bob Hoskins?

Bob Hoskins was previously married to Jane Livesey from 1967 to 1978. They had two children from this marriage, Alex and Sarah. He married his second wife Linda Banwell in 1982 and they were together until Hoskins’ death on 29 April 2014. Furthermore, the pair had two children, Rosa, and Jack.

Who was Bob Hoskins?

Bob Hoskins was an English actor. People mostly know him for his roles in movies including ‘Pennies from Heaven’, ‘The Long Good Friday’, ‘Mona Lisa’, and ‘Who Framed Roger Rabbit’ among others. He received the Golden Globe Award for Best Actor – Motion Picture Drama for his performance in ‘Mona Lisa’.

Hoskins was born as Robert William Hoskins in Bury St Edmunds on October 26, 1942. He was born to parents Robert Hoskins and Elsie Hoskins. His mother was a cook and nursery school teacher and her father was a bookkeeper and lorry driver. He developed an interest in acting in his childhood years. He was of British nationality. Furthermore, he belonged to a mixed ethnic background of English and Romani.

Talking about his education, Hoskins left school with a single O-Level at the age of 15. Later, he started a 3-year accountancy course but did not finish it.

Hoskins began his career in acting at the Victoria Theatre, Stoke-on-Trent. He portrayed the role of a servant named Peter in a production of ‘Romeo and Juliet’. After several brief roles in TV series including ‘The Main Chance’, ‘Villains’, ‘Kate’, and ‘Crown Court’, he landed his first major role in 1975 in the TV series ‘On the Move’ in which he played Alf. Additionally, in the same year, he also appeared in ‘Thriller’ as Sammy Draper. In 1976, he played Det. Sgt. Marble in the TV series ‘The Crezz’. Since then, he appeared in numerous other movies and television series. Furthermore, he also produced several movies and television series. All in all, he had over 130 credits as an actor.

Some other movies and television series that Hoskins had appeared in are ‘Snow White and the Huntsman, ‘Outside Bet’, ‘Neverland’, ‘Made in Dagenham’, ‘A Christmas Carol’, ‘Pinocchio’, ‘The Englishman’s Boy’, ‘Go-Go Tales’, ‘Hollywoodland’, ‘Mrs. Henderson Presents’, ‘Den of Lions’, ‘The Sleeping Dictionary’, ‘Enemy at the Gates’, ‘David Copperfield’, ‘A Room for Romeo Brass’, ‘Cousin Bette’, ‘The Secret Agent’, ‘Nixon’, ‘Super Mario Bros.’, ‘Shattered’, ‘The Raggedy Rawney’, and ‘Mussolini and I’ among others. Furthermore, Hoskins also had 4 credits as a director and 2 credits as a producer. After retiring from acting in 2011, he died of pneumonia at a hospital in London, England on 29 April 2014.

Hoskins garnered the Oscar Award nomination in 1987 for his role in ‘Mona Lisa’. Additionally, he also won the Golden Globe Award for the same movie. In 1987, Hoskins also won the BAFTA Film Award. All in all, he had 23 wins and 15 nominations to his name.

Hoskins had an estimated net worth of around $ 3 million as of 2022.

There was a controversy in 2015 after Hoskins was not featured in the memorial showreel during the ceremony. This angered lots of fans and they took on the social site Twitter to express their views.

Talking about his body measurement, Hoskins had a height of 5 feet 6 inches (1.68 m). Additionally, his hair color was grey and his eye color was brown.