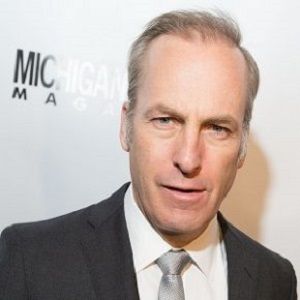 I can't really say how big the cult is. But I'm proud of it. I'm proud that it has a life

I pretty much live about 10 minutes from my office. I have two kids, and I have about 8 projects that I'm working on, so I basically just get up and go to work, and go home every night and play with my kids, so I don't really know.

Bob Odenkirk is a married man since a long time. He is married to the American film producer Naomi Odenkirk. The couple got married in the year 1997. They together have two children, a son named Nathan Odenkirk and a daughter named Erin Odenkirk. Bob and Naomi have been married for two decades now and their relationship is going very well. Before getting married, Bob was in a relationship with the famous American stand-up comedian and actress Janeane Garofalo for over a year in 1995 and 1996.

Who is Bob Odenkirk?

Bob Odenkirk is an American actor, comedian, writer, director, and producer. He is best known for his role as lawyer Saul Goodman on the AMC crime drama series Breaking Bad and its spin-off Better Call Saul. He is also known as a co-creator of the sketch comedy series Mr. Show.

Bob Odenkirk was born Robert John Odenkirk on 22 October 1962, in Naperville, Illinois, USA. He is an American by nationality and he is of German, Irish, and Scottish ethnicity.

He is the son of Walter Odenkirk and Barbara Odenkirk. He has six siblings. Bob’s His younger brother Bill Odenkirk is a comedy writer. His parents divorced due to his fathers’ alcoholism.

Bob began his career as a radio DJ for WIDB in Illinois, where he created a late-night radio comedy show called The Prime Time Special. He was hired as a writer at Saturday Night Live in 1987 and worked there until 1991. Since then, he has done many shows and has appeared in several films and programs. From the late 1980s to the 1990s, he worked as a writer for television shows Saturday Night Live, Late Night with Conan O’Brien, Get a Life, The Ben Stiller Show, and The Dennis Miller Show.

In the early 2000s, Odenkirk discovered the comedy duo Tim & Eric and produced their television series Tom Goes to the Mayor and Tim and Eric Awesome Show, Great Job! He directed three films, Melvin Goes to Dinner (2003), Let’s Go to Prison (2006), and The Brothers Solomon (2007). Odenkirk’s first roles in films were minor roles in films such as Wayne’s World 2, The Cable Guy, Can’t Stop Dancing, and Monkeybone. From 2009 to 2013, he played the role of Saul Goodman in the TV series Breaking Bad for which he won the Screen Actors Guild Award for Outstanding Performance by an Ensemble in a Drama Series in 2014.

Bob Odenkirk: Salary and Net Worth

Bob has a height of 5 feet 9 inches. His body weighs 78kg. He has grey hair and hazel eyes.

Furthermore, also find out more about the early life, career, net worth, relationships, and controversies of actors, comedians, writers, director, and producers like Adam Sandler, Jared Sandler, and Amanda Bynes.