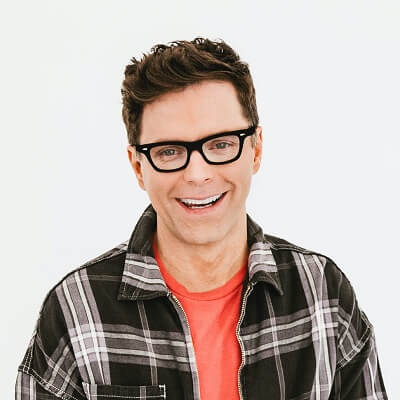 Bobby Bones is in a relationship. He is dating Caitlin Parker. Not much is known about his girlfriend Parker and how the couple met. According to Bobby’s official announcement, they started dating in early 2020. However, they have known each other since November 2019.

His girlfriend lives in Nashville but they regularly take time for their busy life to meet each other. On Valentine’s day 2020, Bobby surprised her by gifting her an Oklahoma City Thunder jersey and taking her to watch the Thunder’s game on courtside. Oklahoma is her favorite basketball team.

Previously, he dated Lindsay Ell. She is an American country singer. They started dating in 2016 and broke up in October 2017.

Prior to that, he was in a relationship with the American musician, Rachel Reinert from 2012 to 2015.

Who is Bobby Bones?

Bobby Bones is an American radio & TV personality, and author. He is best known as the host of the American country music show, The Bobby Bones Show’, mentor of ‘American Idol’, and the author of two New York Times best-selling books.

Bobby Bones was born as Bobby Estell on April 2, 1980, in Hot Springs, Arkansas, USA. As of 2020, his age is 40. His mother’s name is Pamela Hurt. His father left the family when Bones was just five years old. Pamela was just 15 when she got pregnant with Bobby and his father was just 17. He was raised by his mother and grandmother. Pamela died

He spent his childhood days in Mountain Pike, Arkansas. Growing up, he and his family had to face a lot of problems including financial problems but he never stopped dreaming. He had already started dreaming about a career in radio when he was just 5.

Talking about his education, Bones attended Henderson State University where he worked at the campus station, KSWH-FM ‘The Pulse’. In 2002, he graduated with a B.A. in Radio/Television degree.

Bobby Bones has an estimated net worth of around $8 million. His main source of income is his show, The Bobby Bones Show on radio, American Idol, the sales of his books, etc. According to some online sources, he earns around $1 million annually.

In February 2013, the show was nationally syndicated through Premiere Networks and also became available in iHeartRadio.com and the mobile app. It is currently available on more than 150 radio stations all over the U.S., UK, and Canada. In 2012, he was one of the personalities of the Fox Sports Radio lineup and hosted Roddick and Bones, a weekend sports talk program with Andy Roddick.

Moreover, he also hosts the weekly ‘Country Top 30 with Bobby Bones’. He has a deal that will see him host, present, and perform at the annual iHeartRadio Country Festival in Austin and Las Vegas. Furthermore, he is also the host of the annual iHeartRadio Music Awards in Los Angeles. In 2018, Bones became a guest mentor of American Idol in the sixteenth season. The next season, he became its full-time mentor.

He is also an author and has released two books. On May 17, 2016, he released his first book, Bare Bones, I’m Not Lonely If You’re Reading This Book. Around two years later, he released Fail Until You Don’t: Fight. Grind. Repeat. Both of his books became New York Times BestSeller. Despite being a heavy underdog, in 2018, Bones won the Dancing with the Stars competition with his dancing partner on the show, Sharna Burgess. Furthermore, in 2019, he appeared in an episode of Running Wild With Bear Grylls.

His awards include four Austin Music Awards for ‘Best Radio Personality’ and also an Academy of Country Music Award for the ‘National On-Air Personality of the Year’ category.

Bobby stands at a height of 6 feet. His weight is 78 kg. His eye color is blue and his hair is dark brown in color.

In 2018, Bones won the Dancing with the Stars competition. However, his win was controversial. It came as a huge shock to the audience and other contestants. Many even claimed that it was the biggest upset in the history of Dancing With the Stars. He had not earned more than 8 from any judges in his final performance. He was the underdog from the beginning as he had no experience in dancing prior to the competition itself.

In May 2015, iHeartMedia had to pay $1 million as a fine due to the incident.

You may also like to read the Bio, Career, Net Worth, Body Measurements, and more about Geoffrey Paschel, Troy Roberts, Kate Abdo, and more.