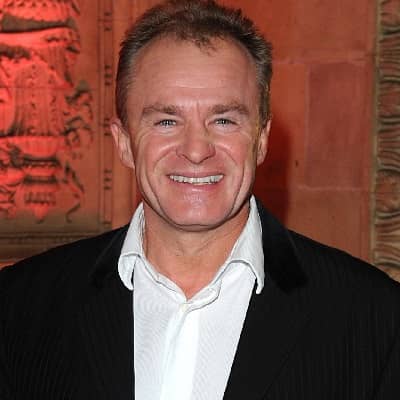 Source: From The Dudley News

People are always wanting to pull me up on my shortfalls.

As a family comedian, it is so wonderful seeing everyone from kids through to grandparents being entertained by you.

When work is going well, your home life struggles, and vice versa.

If I don't get eight hours, I can't function, so I'm a great believer in power naps.

Bobby Davro is probably single as of 2020.

Previously, he was married to his long time girlfriend, Trudi Jameson. Moreover, the duo tied the knot in the lavish wedding ceremony in presence of their friends and family members in the year 1993.

Nonetheless, their love affair took a turn after remaining together for around ten years. It ended with the divorce in the year 2003. The couple together has three children, Marnie Brooke, Tierney Lake, and Brittany RaineWell.

He also has a daughter named Sophie who born in 2005.

Bobby had dated Vicky Wright, daughter of England and Wolves football player Billy Wright. Their affair started in 2007 and ended in 2011.

Bobby Davro is an English actor and comedian. He made his television debut in 1981 followed by a breakthrough in Live from Her Majesty’s (1983).

The actor was also the part of Celebrity Big Brother in the sixteenth series. Davro also involves in charity works and is a supporter of the UK charity Kids ‘n’ Cancer.

Bobby was born on September 13, 1958, in Middlesex, England. His birth name is Robert Christopher Nankeville. He grew up in Staines, UK. He belongs to British nationality and holds English and Ireland ethnicity.

His father, Bill Nankeville is a runner. Bill has represented Great Britain in two Olympic Games. Later his father set up a chain of discount shops called Davro named after his sons David and Robert(Bobby). Likely, his mother’s name is Jeanette Nankeville.

Bobby attended high school in Ashford. And other details regarding his education are not revealed to the public yet.

From his early childhood days, he was actively involved in the entertainment field and decided to pursue his further professional career in acting.

Bobby Davro started his career debuting on a TV show, Live from Her Majesty’s in 1983. He then appeared on various entertainment shows such as Copy Cats, Go For It, and Punchlines.

His career received a climax in the mid-1980s when he runs his own Saturday night ITV shows, Bobby Davro on the Box, Bobby Davro’s TV Annual, and Bobby Davro’s TV Weekly. Switching his channels to the BBC, he appeared on television shows such as Public Enemy Number One and the talent show The Heat Is On in the 1990s.

Replacing John Eccleston as co-presenter he appeared on the game show Run the Risk with Peter Simon. He was back to UK TV screens in May 1997 hosting Yorkshire Television’s Winner Takes All for 65 episodes.

In 2003 Davro appeared in the Channel 4 reality TV show The Games, where 10 celebrities competed against each other in Olympic style events. Between 2007 and 2008, Davro played Vinnie Monks in the BBC One soap EastEnders.

He participated in Dancing on Ice in 2010 and took part in Your Face Sounds Familiar in 2013. Over the years, he has appeared in pantomime many times. In July 2015, Davro appeared at the King’s Head Theatre, Islington as ping-pong-playing London cab driver Eric.

He played different acting roles, often in panto and notably in EastEnders, which he joined in 2007 and had the role of the rogue Vinnie Monks. In 2015, he became one of the housemates on Celebrity Big Brother. On Day 29, 24 September, he reached the final and was placed 4th.

Likely, Bobby Davro appeared on the Channel Five series, In Therapy in 2017. Bobby also has made a guest appearance in various shows like Rainbow titled Guess Who I Am,  Channel 5’s All-Star Talent Show, and Channel 4 program Come Dine with Me.

Being one of the successful personalities, his net worth is around $3 million. He has accumulated such a huge fortune from his professional career as an actor and comedian.

Additionally, he owns a car and house in the united states. However, the detail of his asset is yet to revealed.

He was in media headlines in the year 2015 from his relationship affair. Bobby was in relation to his wife, Trudi Jameson, and invited his long term girlfriend, Vicky Wright. He started living and dating two women together back then.

He was also part of a controversy when he speaks about the comment made on BBC Radio 4 about throwing battery acid at politicians by Jo Brand.

This actor stands tall with a height of 5 ft 8 inches and has a decent weight. With a fair complexion, he has brown colored hair with blue colored eyes.