Bobby McCray is a former NFL player. Bobby is married to Khadijah Haqq. He has four kids.

Bobby McCray is happily married to Khadijah Haqq. She is an actress famous for her roles in Sky High, ATL, and Happy Feet.

The couple started dating in 2006. Following two years of dating, the couple got engaged in November 2008. A couple of years after their engagement, the couple exchanged wedding vows in Vibiana, Los Angeles on 17 July 2010 in the presence of close friends and family.

From their relationship, the couple has three children. They have a son named Christian Louis McCray (born November 2010) and a daughter named Celine Amelia McCray (born February 2014). Bobby and Haqq’s third daughter was born on 18th January 2021. 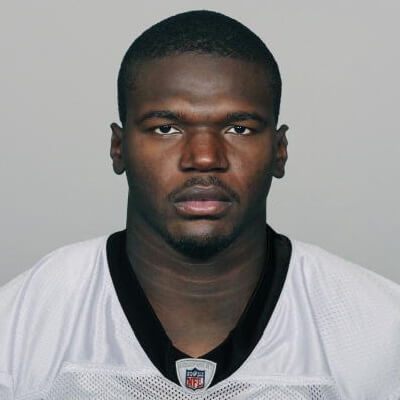 Who is Bobby McCray?

He played as a defensive end for seven seasons in the NFL for the Jacksonville Jaguars, New Orleans Saints, and Philadelphia Eagles.

He has not revealed much about his childhood and family background. There is no information about his parents and siblings.

He spent his childhood days in Miami and his ethnicity is African-American.

Talking about his educational background, he attended Homestead High School in Homestead, Florida. After graduating, he joined the University of Florida in Gainesville, Florida.

The Jacksonville Jaguars selected him in the seventh round of the 2004 NFL Draft. In his first season with the Jaguars, he made 25 tackles and 3.5 sacks. The following year, he completed 23 tackles along with 5.5 sacks. In 2006, he improved and made 49 tackles, 10 sacks, and two forced fumbles. In 2007, he made 24 tackles, 3 sacks, batted down 3 passes, and forced one fumble.

On March 2, 2008, he joined the New Orleans Saints on a five-year contract. In 2009, he started in all three of the Saints’ post-season games leading to their triumph in Super Bowl XLIV. In the first playoff game, against the Arizona Cardinals, opposing QB Kurt Warner threw an interception but Bobby made a hard, but legal, block putting Warner briefly out of the game. This move was praised by many and was considered a game-changer.

After visiting President Obama at the White House as a champion with his Saints teammates in August 2010, the club released him on June 21, 2010. However, they re-signed him to a one-year contract on July 22, 2010.

Furthermore, he has also appeared on TV. He famously starred in Man v. Food in 2010.  Some of his other credits include The Brian McKnight Show, The Mag: For Love or The Game Reggie Bush/Bobby McCray, Rome Is Burning, NFL Monday Night Football, and The Central Park Five.

McCray stands at a height of 6 feet 6 inches and weighs around 119 kg. His hair color is black and he has a pair of dark brown eyes.

Bobby McCray has an estimated net worth of around $10 million as per 2022’s data. He played seven seasons in the NFL.

He had signed a five-year contract with the New Orleans Saints on March 2, 2008, worth $20 million including $5 million in guaranteed money.

In October 2006, the police arrested him and charged him with drug possession and reckless driving. Similarly, in 2009, he accused the law enforcement of filing ‘bogus’ charges after arresting him in December 2009 for driving while intoxicated.

In 2010, McCray had paid $20,000 as a fine for illegal hits on Minnesota Vikings Quarterback Brett Favre in the NFC Championship game.

You may also like to read the Bio, Career, Net Worth, Relationships, and more about Jay Cutler, Miles Austin, Curtis Conway, and more.