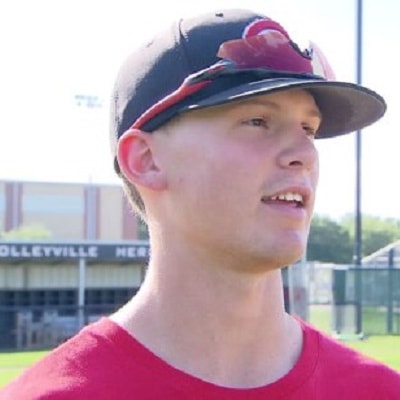 Bobby Witt Jr. is currently in a relationship. He is dating his high school sweetheart for a couple of years. He has appeared with his girlfriend in his social media but he has not revealed any further information about her.

Who is Bobby Witt Jr.?

He was born on June 14, 2000, in Colleyville, Texas, USA. His birth name is Robert Andrew Witt. He was born to father Bobby Witt and mother Laurie Witt. He has three older siblings- sisters Shaley Witt, Kiki Witt, and Nikki Witt Russell.

His father was a baseball pitcher has played in MBL for Oakland Athletics, Florida Marlins, Texas Rangers, and Bobby’s mother and sisters were athletes.

Bobby holds American citizenship but his ethnicity is unknown.

He joined Colleyville Heritage High School in Colleyville, Texas and he is committed to playing college baseball at the University of Oklahoma.

During the initial period of his career, he played in the Under Armour All-America Baseball Game. Later, he played for Team USA in Panama City Team USA during 2018 COPABE Pan-American Championships and had won a gold medal.

He was named team MVP, and also the Perfect Game All-American Classic in 2018 and as the Gatorade National Baseball Player of the Year in 2019.

The talented player must have earned a huge sum of money from his career however, he has not disclosed his exact net worth, salary, and income. He was signed for $7.79 million by the Kansas City Royals with the second overall pick.

Bobby has not been involved in any rumors and controversies in his personal and professional life.

Bobby Witt Jr. has a height of 6 ft. 1 and weighs 84 kg. He has brown eyes and blonde hair. But, other information regarding his shoe size, dress size, etc. are unknown.