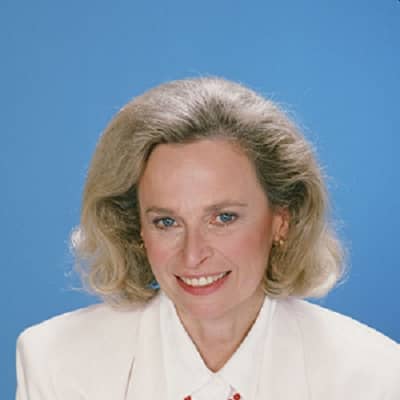 Bonnie Bartlett is a married woman. Her husband’s name is William Daniels, who is an actor.

The couple met each other at Northwestern University. They shared a marriage vow on June 30, 1951, and moved to New York.

Likewise, the couple gave birth to a first child, unfortunately, that child died within 24 hours due to complications in birth.

Later, they prompted the two to adopt two children named Michael and Robert. Michael is an assistant director and stage manager in Los Angeles. Apart that, Robert is an artist and computer graphics designer based in New York.

Who is Bonnie Bartlett?

Bonnie Bartlett is an American actress. Further, she is famous for her role as Ellen Craig on the medical drama series St. Elsewhere.

In addition, her husband is also an actor so that this married couple won the 1986 Emmy Awards. She and her husband served on the Screen Actors Guild’s Board of Directors.

She was born on June 20, 1929, in Wisconsin Rapids, US. She inherits American nationality and belongs to the Caucasian ethnicity.

Moreover, her father’s name is Elwin Earl Bartlett and her mother’s name is Carrie Archer. She was raised with her parents in Moline, Illinois whose father was an insurance salesman.

Regarding his academic qualifications, she has completed her elementary education at Moline High School. Then, she joined acting at Northwestern University, and later, she enrolled at Lee Strasberg.

Initially, she began her acting career with Lee Strasberg and she played the role of heroine “Vanessa Dale Raven” on the soap opera Love of Life from 1955 to 1959. She played the character of Ellie Crown, in the previous role in the program. Then, she moved on to nighttime roles in the 1960s.

Furthermore, she is mostly famous for her role as Ellen Craig on St. Elsewhere. For several years she has appeared on such programs as The Golden Girls, Gunsmoke, The Rockford Files, and The Waltons. In the year 1974, she has appeared in a recurring role as Grace Snider on Little House on the Prairie. In the 1980s, her career rises to stardom including the miniseries V and North and South: Book II.

Apart from that, this actress and her husband William Daniels made Emmy Awards history in 1986. The couple became just the second real-life married couple to win acting awards on the same night. They won for their roles as Dr. Mark and Mrs. Ellen Craig on the TV series St. Elsewhere. Later, she played the role of college dean who employed her husband’s character in a season of Daniel’s ABC series Boy Meets World, and their character later married.

In 1988, St. Elsewhere ended, she included herself in major roles on Wiseguy as a tough and corrupt matriarch of a sewage business; as Andrea Drey, Secretary-General of the United Earth Oceans Organization.

This actress has an estimated net worth of around 58 Million. Her income source is through her acting career.

She has not revealed any information regarding her rumors and controversy.

During her high school days, she was added to the hall of honor at her Alma matter, Moline High School.

Likewise, she won two Emmy awards for her role in the TV drama, St. Elsewhere. In 1986 and 1987, she was the best-supporting actress winner and was nominated as well in 1998. Whereas she also won a Q Award in 1987 as Best Supporting Actress in a Quality Drama Series.

Moreover, she has a fair complexion with gray hair color. She has a pair of brown eyes.

Heading towards her social media, she is not active on any social media platforms recently.