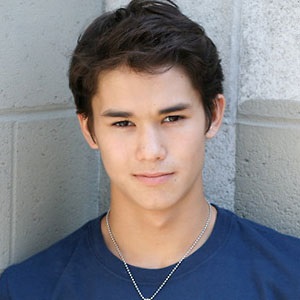 When a dog is really comfortable, they give off a certain scent and you can smell it on their paws

'A Bug's Life' is a really funny movie and the characters have such different personalities. The movie is happy and then gets really sad and I'm like, W'hoa, I'm feeling this way and this movie is about bugs.

What is the relationship of Booboo Stewart?

Booboo is a very romantic person he was in a relationship with two. Firstly he dated Jodelle Ferland who is a Canadian actress. He was in the relationship for 2 years from 2010 to 2012. Jodelle is of the same age of Booboo. They came in relation to the release of the third part of Twilight Saga. The Second is Samantha Boscarino who is an American actress and is of the same age as Booboo. After being in relationship with Gregg Sulkin for almost a year Samantha selected booboo as her boyfriend in the year 2012

Who is Booboo Stewart?

Seth Clearwater a well-known character of a famous sequel movie The Twilight Saga, The Werewolf is no one other than Booboo Stewart. He worked in all the sequels to the movie. He entered the industry as a model taking part in many campaigns. He also runs a local band named Echoes of Angels. He was in the Martial Arts Junior Hall of Fame in 2004.

Nils Allen Stewart Jr. with the nickname Booboo is now famously known as BooBoo Stewart. He was born on 21 January 1994 in Beverly Hills, California, United States. His nationality is American and his ethnicity is Scottish.

He was encouraged by his family members who are also enrolled in the industry. His father, Nils Allen Stewart is a stunt coordinator and has performed many stunts, and her mother, Renee Stewart is an actress and producer too. Boo started his career at the age of 10. He has a total of 3 siblings and Fivel Stewart who is an actress-singer, Maegan Stewart a special effect artist and Sage Stewart an actress-singer. Booboo resides in Los Angeles with his family.

In which school did Booboo Stewart attend?

There is no information on Booboo’s educational background.

At a very small age BooBoo started his career he was starred in various TV shows, Blue Dolphin Kids was the first show that he hosted until its 6th season. Like his father, he was also a stunt person. He did stunts for many movies like ZOOM and Beowulf. He also has been doing karate when he was at the age of 3.

He was also the best trained martial art person in North Hollywood. He even became Martial Art Champion in 2002 and 2003 and was on Its Hall of Fame in 2004. He can also be spotted in the White Frog, the last survivors, Space Warriors, an evergreen Christmas and much more. Booboo was also a singer and has a band named “Echoes of Angels”. He was also famous for the role of a werewolf in the series of The Twilight Saga.

He also worked in many other movies like 18 Fingers of Death, The Fifth Commandment, Running Deer, after that he again worked for a famous movie X-Men in its series named X-Men: Days Of Future Past, as Warpath and The Last Survivors as a Dean. He also worked with Eminem in his music video Just Lose it.

How much is the net worth of Booboo Stewart?

Talking about the rumors and controversy of this talented actor Booboo Stewart, “Currently, there are no desperate rumors regarding his personal and professional life. It seems he is doing his best job without harming others and has been a private person in his life, for which he has not been in any controversy yet.

Booboo Stewart has a height of 5 feet 9 inches. His body weighs 70kg. He has black hair and dark brown eyes. Besides this, his shoe size is 10US.