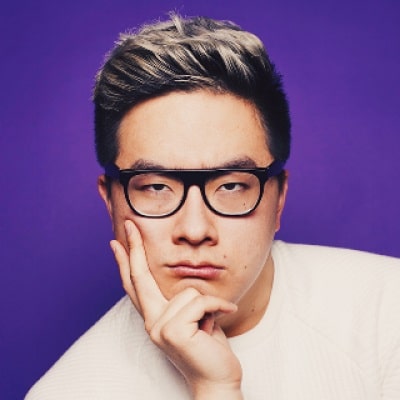 Bowen Yang is gay in nature. He is open about his sexuality but has not shared many details about his former boyfriends.

Although he is considered to be a single man, a secret boyfriend cannot be ruled out. Currently, he is unmarried, and of course, he has no husband/wife and children.

Who is Bowen Yang?

Bowen Yang is an American comedian, actor, producer, writer. She rose to fame after being the first Chinese-American to be cast in Saturday Night Live (SNL) and the third openly gay male cast member.

He was born on 7 November 1990 in Brooklyn, New York City, USA. He was born to a Chinese immigrant mother and father. Bowen has an older sibling, sister Yang Yang and was raised in Denver, Colorado.

He dreamt to become a professional doctor and he used to watch Saturday Night Live during his childhood.

Bowen holds American citizenship and his ethnicity is Asian.

He completed high school at Smoky Hill High School and he studied at New York University. Later,  he graduated from the same with a bachelor’s degree in chemistry.

During his childhood, Bowen Yang was determined to pursue a career as a doctor (as he was deeply influenced by Grey’s Anatomy), he eventually turned to act and performing as a comedian.

Yang met Matt Rogers while studying at New York University, Bowen but was in rival theater groups. It took them some time to become friends. The duo began their own podcast Las Culturistas in 2016. The show is mostly about popular culture, gay topics and helps Bowen Yang to build a fanbase through it.

In 2018 Yang starred alongside Awkwafina and BD Wong in a show which was picked up by Comedy Central. In 2019 he was named Forbes Magazine‘s 30 Under 30.

Furthermore, he is also well known for his Twitter lip-syncing videos and his videos have garnered thousands of likes as well as retweets.

In September 2019 Saturday Night Live (SNL) announced that Bowen Yang has been cast as a writer in season 45 of the SNL and became the first Chinese-American cast member and third openly gay male cast member on SNL.

Also, Yang was cast alongside Shane Gillis and Chloe Fineman in season 45 of SNL after actress and comedian Leslie Jones departed from the show.

But when Gillis’ old racial and homophobic slurs resurfaced, he was fired from the show before his debut performance.

She was nominated for Primetime Emmy Award in the category Outstanding Writing for a Variety Series for ‘Saturday Night Live’ in 2019.

He has an estimated net worth of around $3 million and he has earned that sum of money from her professional career. Also, his annual salary is around $60k.

To know more about Jonathan Scott, Carly Hughes, and Clara Alonso, please click on the link.

Protective face masks have become a wellness trend and an item of Fashion!