Is BoyWithUke Single or Dating?

BoyWithUke is currently Single and doesn’t have a boyfriend.

Well, when it comes to BoyWithUke’s love life, there is a paucity of information regarding this as the artist has done everything within his power to keep these details under lock and key.

If he gets involved in a romantic relationship with anyone, the info will be updated as soon as possible. 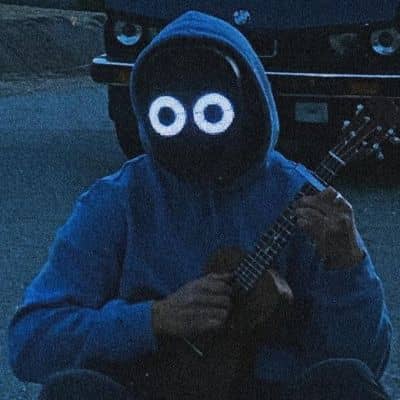 BoyWithUke is an American masked singer, songwriter, producer & social media personality who performs on the ukelele. He stole the limelight after the video of him singing, ‘Toxic‘ went viral on Tiktok.

The masked singer was born in Massachusetts, the United States on May 7, 2002. As of 2022, BoyWithUke is 20 years old holding an American citizenship. Following Christianity, he has a Taurus birth zodiac sign. His ethnicity is known.

Similarly, maintaining a hidden face behind a two-eyed mask, he has not disclosed the details of his family as well as educational background.

In 2021, BoyWithUke began his musical journey. He came up with a two-eyed masked and an artist name, BoyWithUke. The star is also fond of playing Ukelele, so he chose the following name. He can be seen playing the instruments in his songs.

Initially, he released his EP Trouvaille which is combined of three songs including, Falling For You, Tired of Wanting You, and Animal Crackers respectively. Then, he released his next EP titled, Faded, which consisted of two songs namely, LoveSick and Loafers.

Following year, he joined the Tiktok and posted some of his music pieces, which are made DIY and using the GarageBand software. His audio on the cover of his single Toxic went viral on the app and gained huge exposure. The audio is even used in Instagram Reels & YouTube Shorts.

After his success with his first video in the Tiktok, he released two LPs titled, Melatonin Dreams and Fever Dreams on Spotify.

Currently, he is seen wearing a hooded sweatshirt and a large cartoon-eyed mask in his videos. Being able to impress everyone with his talent, sooner he signed a music deal with Republic Records. Thus, 2021 became one of the prominent years for him from starting to ending with a successful musical deal.

Moving on, in 2022, BoyWithUke released his single named, Long Drives. He also reveals he will be doing a tour in the US and European countries like Germany, England, and the Netherlands.

As we all know, his primary source of earnings is via music & tours. So, the net worth of rising music star, BoyWithUke is estimated to be around $1.5 million.

At the moment, he has not shared the details of his salaries and earnings.

The music artist is famous for his masked face. Fans seem to be keen to see his real face, but he mentions that he was scared about others judging him. So, he shared that wearing the mask has helped him get over the fear & was able to make great music.

BoyWithUke also shared that, he bought the mask on Amazon. However, the Tiktok star is keeping himself away from serious rumors and controversies.

Maintaining a low-key profile, he has not shared his body measurements as well.

Moreover, BoyWithUke has a two-eyed mask covered on his face, and he mostly wears big hooded sweatshirts and hoodies. So, it is not possible to know his skin complexion, hair, and eye color as well.

Being a social media personality, he has huge fan followings on his social media accounts. BoyWithUke is present on Instagram under the username, @boywithuke having more than 711 K followers.

Likewise, he has a Twitter account, which has garnered around 18.4K followers. Adding more, there is a Facebook page under his name, which has about 8.6K followers.

Moreover, his Tiktok account is enriched with over 5.1 million followers and 79.4 million likes.

Other than this, he has a youtube channel titled, BoyWithUke, which is enriched with more than 2.07 million subscribers.