Skip to content
Married Biography
Married Biography / Entertainment / Who is Brad Ashenfelter? Know about his relationship with Kesha, net worth of Kesha in 2021, interesting facts, biography

Posted by MarriedBiography Posted on March 8, 2021 | In Dating , Net Worth , Relationship
Share this 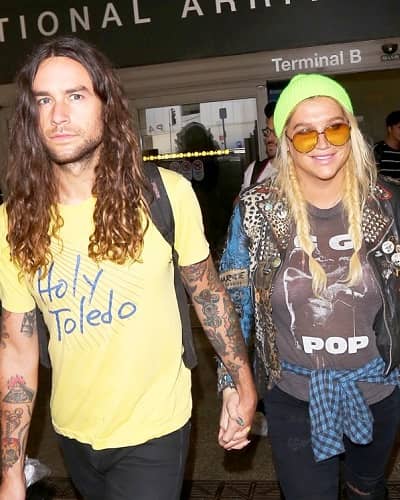 Brad Ashenfelter is the boyfriend of an American pop singer Kesha. He worked as a writer for the website The Inertia.

How did Brad Ashenfelter and Kesha meet?

Brad Ashenfelter and Kesha met each other through her hairstylist. When she first met him she was not a fan of him as he was facial-hair free as she is a facial hair enthusiast. But it was love at first sight. She revealed,

“Then he kissed me, and it was the nicest kiss I ever had. I was like, ‘Wow, you’re such a pure soul. Holy shit.’ And I knew from that moment, ‘I gotta hold on to you.’”

Their relationship grew more and more when he flew out to visit her every weekend when she was in rehab. In the year 2017, they got a matching tattoo of skulls and rainbow which was made by an artist Walter McDonald. They have not revealed what the meaning of the tattoo is. Around the time of 2017, there were rumors of their engagement and wedding plans but it has not happened yet.

In an interview with Ryan Seacrest, Kesha said,

“I do [like dirty boys], not like physically covered in dirt, but I just like them to be beardy [with] long hair and look like a little homeless. I like guys who look like they don’t groom themselves. I’m not into guys who are very high-maintenance. I don’t want them to take longer to get ready than me.”

Brad is a supportive boyfriend as he has been with her and supported sexuality.

Kesha has a net worth of $10 million as per Celebrity Net Worth. In the year 2020, she bought a $5 million home in LA’s Mar Vista neighborhood. Previously, she had a home in nearby Venice, California which she sold in 2015 after a year of purchasing for $1.7 million. Likewise, she also had a home in Nashville which she sold in 2016 for $1.4 million.

Her albums are High Road, Rainbow, Warrior, and Animal. Her singles are Since I Was Young, Tonight, Resentment, My Own Dance, Raising Hell, Woman, This Is Me, and more.

Also read 6 must-know facts about Roberto Martinez Jr from the 6th season of ‘The Bachelorette’!

Kesha is an American pop singer. She is best known for her music and more for her legal battles with the producer. She is also a songwriter and a rapper.

Her music and image propelled her to immediate success with her debut album. She has also been involved with animal rights and LGBT activism. She is better known as Ke$ha.

Tags : Boyfriend of Kesha The Inertia