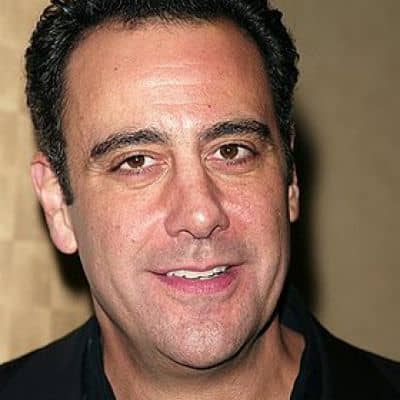 What is the relationship of Brad Garrett?

Talking about his relationship details, Brad Garrett is happily living a married life along with his longtime partner, IsaBeall Quella. The couple tied the knot on 11 November 2021 in Montecito, California.

Moreover, the couple had to postpone their wedding ceremony four times, twice due to COVID-19, one due to a wildfire, and once due to mudslide. Earlier, they met for the first time at Vose art gallery in Boston in 2008 and dated for seven years.

Later on, Brad proposed IsaBeall and got engaged in the Winston Churchill suite at New York’s Waldorf Astoria.

More about his relationship…

Previously, Garret was married to his then-girlfriend, Jill Diven. The star proposed to her on the set of Everybody Love Raymond and eventually they tied the knot on 18 May 1999. The former couple was blessed with two children, a son, Maxwell(born in 1998), and a daughter, Hope(born in 2000).

However, things did not turn good for them as Jill filed for divorce in 2006 and they separated finally in November 2007.

Who is Brad Garrett?

Moreover, he has also featured in the leading role of Eddie Stark on the Fox sitcom, Til Death from 2006 to 2010. Garrett has won three Primetime Emmy Awards and three other nominations till now.

Brad Garrett was born on 14 April 1960. At present, he is 62 years young star. Likewise, his birthplace is Oxnard, California, USA.

Brad is the son of his father, Alvin “Al” Gerstenfeld whereas his mother is Barbara Garrett. Moreover, he has two older brothers, Jeff and Paul.

Talking about his nationality, Garrett holds an American identity whereas his ethnicity is Caucasian.

Regarding education, the star has attended George Ellery Hale Middle School and graduated from El Camino Real High School. Later, he studied at UCLA for less than two months but dropped out to start his comedy career.

Brad began his career in the comedy field at different improv clubs in Los Angeles which consist of The Improv in Hollywood and The Ice House in Pasadena.

He became the first $100,000 grand champion winner in the comedy category of the TV show, Star Search. He also opened in Las Vegas for Frank Sinatra, David Copperfield, Smokey Robinson, Sammy Davis, Jr., the Beach Boys, and so on.

Moreover, Garrett has also worked as a voice actor in movies like Mighty Ducks: The Animated Series, 2 Stupid Dogs, The Spooktacular New Adventures of Casper, Project Geeker, Biker Mice from Mars, Finding Nemo, Ratatouille, and so on.

Brad’s role in Everybody Loves Raymond won him five Emmy Award nominations and 2002, 2003, and 2005 Emmy Awards for Outstanding Supporting Actor in a Comedy series.

In 2013, the star performed the role of the Chug in the movie, Planes. He also played a recurring role in The Crazy Ones.

Freshly, the star performed the role of Frankenstein’s monster in a Christmas commercial for Apple’s iPhone 7.

A famed personality, Garrett has earned a handsome amount of money from his profession. He has been active in his profession from the year 1980 till the present.

As of 2022, It is reported that Brad Garrett has an estimated net worth of $50 million. In 2016, Brad was featured in a Christmas commercial for the Apple iPhone 7. He has also featured in a number of commercials for 7-Up.

Also, in 2010, Brad opened his own comedy club in the Tropicana Resort and Casino in Las Vegas. However, the club closed down a year later, but he began another identical club at the MGM Grand.

In 2006, Garrett paid $8.8 million for a mansion in Malibu, California. Six years later, it was sold at the market value of $ 11 million.

Brad has been a part of controversy once when he slapped away a photographer’s camera in 2007. The photographer then claimed that the camera had hit him in the face, and filed a case against Garrett. But, it was settled later on after the hearing from the district attorney.

Other than that, Brad has never been part of any controversial matter or rumors till now. The star has been preoccupied with his professional and private life.

61 years young star, Brad has handsome looks and an admirable personality. He stands at a height of 6 feet 8inches. Also, he has a balanced body weight of 85 kg.

Furthermore, Garrett has brown eyes whereas his hair is black.

Nevertheless, the comedian has never mentioned other physical details in the public yet.

Regarding his social media presence, Brad Garrett is an active personality on social media. Brad has more than 51.4k followers on his official Instagram account @bradgarrett.

He is also active on Twitter with around 4.6k followers.

Moreover, Garrett is also available on Facebook with nearly – fans and supporters.