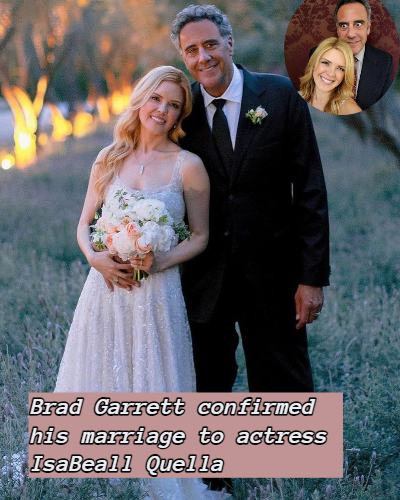 On January 26, Brad confirms to PEOPLE that he quietly wed his fiancée, IsaBeall Quella, on 11th November 2021.

“I married the love of my life,” later Garrett joked, “Her, not so much.”

The beautiful couple walked down the aisle in Montecito, California. They had postponed their wedding four times; twice due to the COVID-19 pandemic, once due to a wildfire, and once due to a mudslide.

For their big days, the groom wore a suit designed by Di Stefano whereas his bride wore a stunning gown designed by Reem Acra.

Presently, the couple resides in Malibu with their two dogs; Ivy and Chester.

Brad and IsaBeall first met at Vose art gallery in Boston in 2008. IsaBeall is an actress who rose to fame for her roles in “Single Parents” and “Frozen Love”. During the time, Isa Beall worked at Vose galleries.

Shortly after, the two fall for each other and dated for almost seven years. In December 2015, Brad proposed to Quella and they got engaged in the Winston Churchill suite at New York’s Waldorf Astoria as singer/songwriter Marc Cohn played the couple’s favorite songs on piano.

During an interview with Entertainment Tonight, Garrett joked about his 24-age difference with his then-fiancee in May. He said,

“I’m with someone now who’s a little young. We had an AMBER Alert the other night when we went to the movies.”

The following year, the pair together spotted on the red carpet at the 2016 Emmys, where Brad’s show Fargo was nominated for the outstanding limited series award.

“So grateful to have had this amazing, kind, handsome man as my date last night,” Quella wrote on Twitter with a selfie of the two that night.

Earlier, Brad was married to Jill Diven. He proposed to Jill, now 58 on the set of Everybody Loves Raymond in 1998. The following year, they walked down the aisle on 18 May 1999.

They together have two children,  son Maxwell (born 1998) and daughter Hope (born 2000). However, driven filed for divorce after seven years of marriage. The divorce was later finalized in November 2007.

Also read “Popular for portraying the role of Janice Goralnik in the Friends! Maggie Wheeler has a beautiful life-A journey of perfect married life, active filmography!”

Brad is an American renowned actor, stand-up comedian, and professional poker player. His full name is Bradley Henry Gerstenfeld. In the early 1980s, he made his career breakthrough as a successful stand-up comedian.

Afterward, he began appearing in several tv series and films. He got his first major role on the CBS sitcom, Everybody Loves Raymond as Robert Barone. Throughout his career, Garrett has won Primetime Emmy Awards, with three other nominations so far.