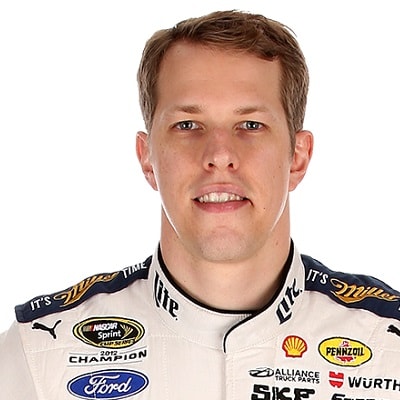 I feel like the sport is coming to me.

I feel like I am a top-three driver in the Sprint Cup series.

I know that when I have had whatever run-ins I have had throughout my career, I have had them because I have done the things that I feel like I need to do to be the best, and that is why I am in this sport, that is what drives me.

What is the relationship of Brad Keselowski?

Brad Keselowski is a married person. He has been married to his longtime girlfriend Paige White since February 10, 2017. The pair announced their engagement on December 11, 2016.

The couple announced the pregnancy on February 4, 2015, and are blessed with a daughter Scarlett Keselowski born on May 20, 2015.

Who is Brad Keselowski?

Brad Keselowski is an American stock car racing driver who is currently a member of Team Penske. He competes full-time in the Monster Energy NASCAR Cup Series and NASCAR Xfinity Series.

Brad holds American citizenship but his ethnicity is unknown.

Talking about his education history, he attended Rochester High School.

Ge used to work at his father’s race shop where he mowed the grass and swept and mopped the floors. He started his professional career in 2000, racing stock cars in the Factory Stock division, and in 2004 began his NASCAR career.

After that, he began competing in the Truck Series full-time in 2005 and finished seventh in the Florida Dodge Dealers 250. He made his breakthrough in 2007-2009 in which he raced in the 2007 Truck Series season, and 2009 Nationwide Series, and won a Sprint Cup.

Moreover, he appeared in the movie ‘Sharknado 3: Oh Hell No!’, had a cameo as a security guard in the 2017 film ‘Logan Lucky’, and also guest-starred in various episodes of the canceled sitcom ‘Sullivan & Son.

As of 2022, he has an estimated net worth of around $45 million and he has earned that sum of money from his professional career. Also, he earns around $11.4 million per year.

Brad has been successful in keeping himself far from rumors and controversies in his personal and professional life.

Brad Keselowski has a height of 5 ft. 10 inches and weighs 70 kg. Brad has blue eyes and blonde hair. His shoe size, dress size, etc. are not available.