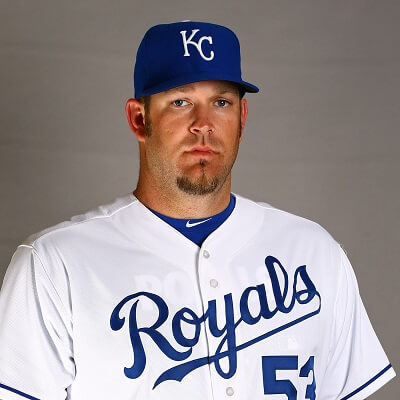 Brad Penny is a married man. He is married to Kaci Cook. The couple exchanged wedding vows on August 1, 2013, in Hawaii. Cook is a former Oklahoma City Thunder dancer.

The couple started dating in 2012 and became engaged in January 2013. They don’t have any children from their marriage so far.

Regarding his previous relationship, he was in a relationship with Karina Smirnoff who is a professional dancer. They were dating since October 2009 and even got engaged after a year of dating. However, their engagement ended in December 2011 after they broke up.

Who is Brad Penny?

Brad Penny is an American former hard-throwing right-handed baseball pitcher who is famous for winning the World Series with the Florida Marlins in 2003 and the San Francisco Giants in 2012.

He has also played in Major League Baseball (MLB) for the Florida Maimi Marlins. Likewise, he is also famous for being an All-Star in 2006 and 2007. He has played for other teams like  Los Angeles Dodgers, Boston Red Sox, San Francisco Giants, St. Louis Cardinals, and Detroit Tigers, and in Nippon Professional Baseball for the Fukuoka SoftBank Hawks.

Brad Penny was born Bradley Wayne Penny on May 24, 1978, in Oklahoma, US. His current age is 41. There is no information about his parents or siblings yet.

Regarding his education, he attended Broken Arrow Senior High School where he was an All-State selection and Frontier Conference Pitcher of the Year.

Penny was very good at baseball since high school. In 1996, he was selected by the Arizona Diamondbacks in the 5th round of the Major League Baseball draft. On June 4, 1996, he was then signed to the Diamondbacks. He was then sent to the Arizona Summer League. His remarkable performance earned him the fourth spot in the league in ERA(2.36) and was also named Arizona’s Organizational Pitcher of the Month in August.

His first major league appearance was on April 7, 2000, where he played against the Colorado Rockies. Penny was traded to the Los Angeles Dodgers on July 30, 2004. Unfortunately, he suffered a serious arm injury during the first inning of his second start. He then returned in September but again injured himself after three innings in his first start off the DL. He returned to the Dodgers on April 24, 2005, in which he performed a solid season.

Brad Penny has an estimated net worth of around $20 million with an annual salary of $500,000. Most of his income comes from being a baseball star. His salary throughout his baseball career are listed below:

Being a baseball player, there have been many rumors of his transfer.

During his time in the Fukuoka SoftBank Hawks in 2012, he claimed that he injured his elbow and was asked to be removed from the game. However, the result of the two MRI exams he took both was negative. Then he was termed as a ‘huge disappointment’ and a local newspaper reported that signing Penny was “the worst decision in franchise history.

Brad Penny is a tall guy with a height of 6 feet and 3 inches and he weighs 104 kg. Moreover, he has black hair with brown eyes.

You may also like to know more about the Bio, Age, Career, Net Worth, Relationship about Dylan Bundy, Joey Votto, Scott Rolen, and Joe Girardi