Updated On November 18, 2022 | Published By: Natalie | In Affair , Dating , Relationship
Share this 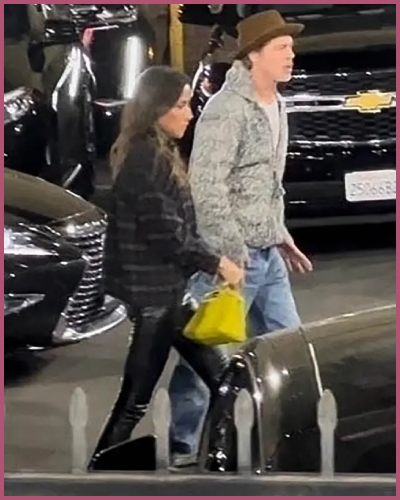 Could Brad Pitt and Ines de Ramon be the new couple in town?

Love is in the air for Brad Pitt and his new love interest Ines de Ramon.

After being spotted together for the first time at Bono‘s concert, the actor and the jewelry exec. sparked dating rumors but insiders say that the two have been seeing each other for quite some time.

The informant also claimed that the two met through a mutual friend and that Pitt is smitten with his new partner.

Ramon is the ex-wife of Vampire Dairies star Paul Wesley, with whom she separated earlier this year.

The source confirmed that though the two really like each other, it’s not an exclusive relationship.

“Ines is cute, fun and energetic,”

“She has a great personality. Brad enjoys spending time with her.”

In September, it became public that Ramon and Wesley were parting ways after three years of marriage.

The pair started dating in 2018 and tied the knot a  year later in a private ceremony attended by family and close friends.

The Vampire Diaries star is also happy with his model girlfriend Natalie Kuckenburg.

A rep for the couple said at the time:

“The decision to separate is mutual and occurred five months ago,”

Brad is on the verge of a messy divorce from Angelina

Meanwhile, the Oscar winner, who was married to two of Hollywood’s biggest female stars, Jennifer Aniston from 2000 to 2005, and Angelina Jolie from  2014 to 2019- was recently linked to model Emily Ratajkowski.

Just a week after Ramon and Wesley’s breakup became public, the alleged couple came together a couple of times together.

Some other sources also claimed that Brad has been with many other women in recent months but he’s not that fully committed to anyone at the moment.

De Ramon, who is not an A-lister and who is reportedly very private, could be an interesting match for Brad.

“Brad has quietly dated the last couple of years,”

“He worries that Jolie will badmouth him to their kids, more than she already has, if he has a serious girlfriend.”

Brangelina, as they were famously called, married in 2014 but the Salt actress filed for divorce just two years later.

Since then, the exes have been battling over the custody of their children and their business ventures, the most famous one being a $60 million vineyard in the South of France.

Also, Read Brad Pitt&’s Lawyer Responds to Angelina Jolie after She Made Further Allegations Against the Actor!