Brad Richardson is currently in a relationship with Gossip Girl star, Jessica Szohr. They announced their relationship via Jessica’s Instagram story in March 2019.

As of now, the couple is expecting their first child together. They broke the news via Instagram post with the caption, Full of Joy.

Previously, Brad was married to Lauren Hunt. His ex-wife, Lauren is an actress by profession. They married on the 8th of August 2014. The pair divorced each other shortly after his relationship with Jessica was disclosed. 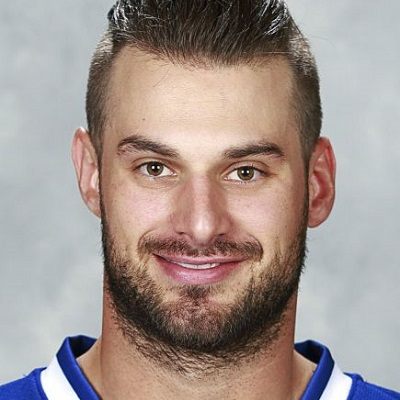 Who is Brad Richardson?

Brad Richardson is an Ontario Hockey League Award-winning ice hockey player. He is renowned for his playing style in the forward position as a center.

Currently, he is the center of the Arizona Coyotes of NHL.

Brad Richardson was born on 4th February 1985 in Belleville, Ontario, Canada. His birth name is Bradley Benjamin Stanley Richardson. He is of British-Swedish ethnicity.

As of now, he has not shared any details on his family background including his father, mother, and siblings.

Talking about his educational background, he graduated from the St. Theresa Catholic Secondary School in his hometown.

Brad Richardson started his career as an ice hockey player with the minor ice hockey league for the AA Belleville Bobcats. After that, he joined the AAA Quinte Red Devils.

With the team, he played for the Quebec International Pee-Wee Hockey Tournament in 1998.

Moving forward, in 2003, Colorado Avalanche drafted him at the 2003 NHL Entry Draft. Along with the team, he played at the Ontario Hockey League.

In the 2005-06 season, he played his first professional game in National Hockey League with the team. The same year, he played in the American Hockey League along with Lowell Lock Monsters.

The following year, he played for NHL for Colorado. The season, he reached his career peak recording 14 goals and 22 points in 73 games. Later, on the 21st of June 2008, Colorado traded him to Los Angeles Kings. In September 2008, he signed a two-year contract with Kings.

Later, on the 23rd of October 2010, he scored his first hattrick against his old team, Colorado. Moving forward, he resigned with the Kings for two years. After that, in 2013, he became a free agent. On the 5th of July 2013, he signed with Vancouver for two-year that worth $2.3 million.

Brad Richardson has blue eyes with brunette hair. He stands at a height of 6 feet and weighs around 87 kg.

Talking about his appearance, he has a charming persona with a square-shaped facial structure. Also, he prefers to have slightly grown facial hair.

To date, he has not been involved in any sort of controversy and scandals that created a buzz in the media. Besides that, he has managed to maintain distance from any type of rumors.

You may also read the bio of Patrice Bergeron, Emma Andersson, and Tara Reid.